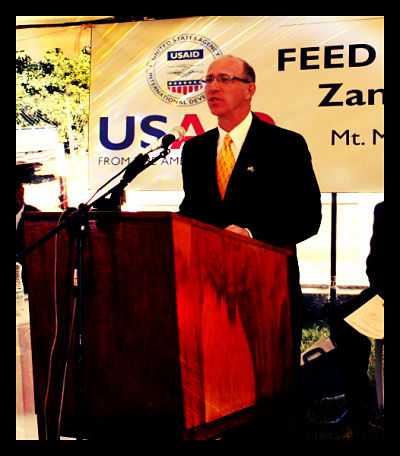 A Zambian Government official, Bert Mushala, praised the American government for its foreign aid initiatives at the launch of two new USAID health programs in Zambia in June. According to USAID Mission director for Zambia, Susan Brems, the two projects, Thrive and Mawa, are aimed at strengthening nutrition within small farming households and with those living with HIV. The initiatives would also focus on enhancing economic opportunities for poor households, encouraging crop diversification.

The Thrive and Mawa programs, funded by USAID and the President’s Emergency Plan for AIDS Relief (PEPFAR), would benefit 21,500 people in the Eastern Province of Zambia. This runs parallel to USAID’s Feed the Future program which is aimed at assisting 200,000 smallholder farming households rise out of poverty, decreasing the percentage of malnourished children, and augmenting the production and consumption of nutritious crops. Zambia was selected as a Feed the Future country because of its vast capability for agricultural growth, along with its large food insecurity.

The Feed the Future program and the Thrive and Mawa programs are all focused around the Eastern Province due to the high prevalence of poverty there. As the Eastern Province Permanent Secretary Bert Mushala has witnessed USAID health programs in this poor region of Zambia and commended USAID’s support of Zambia.

USAID’s programs in Zambia, working under the US Global Health Initiative, have several other focuses besides nutrition and empowering small farmers. Under PEPFAR, USAID works with the Ministry of Health to prevent mother-to -child transmission of HIV. The amount of infants born with HIV has dropped from 39 percent in 2005 to 5 percent in 2010, and over 400,000 Zambians are now on regular antiretroviral treatments for HIV. USAID has also addressed gender-based violence and supported over 500,000 orphans and vulnerable children.

These USAID health programs in Zambia are all part of a larger network of the USAID initiatives in Zambia. USAID also focuses on economic growth, education, and creating a just and democratic government in the country. These initiatives have led to a longer life expectancy for Zambians along with 12 straight years of notable economic growth. As a country that has such potential for growth, particularly in agriculture, a prosperous Zambia is crucial to stability in a region which includes the war torn Democratic Republic of the Congo.