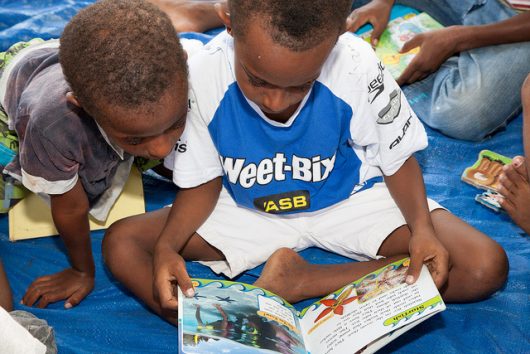 It’s hard enough to understand each other within one language. Imagine having more than 850 different languages spoken by seven million people in one country, with most of these languages having no written form. Such is the condition of Papua New Guinea, the most linguistically diverse nation in the world.

Papua New Guinea has come a long way in recent years, but for the most part is still a widely underdeveloped and rural country. Only 13 percent of citizens live in cities. Mountains, swamps, jungles and other topographical obstacles have kept some villages completely isolated. Some of its inhabitants have never had any contact with the outside world. This inaccessibility to books, technology, and paper have kept many of these rural areas from developing written languages. It’s no surprise, then, that the nation’s literacy rate is a low 62.4 percent.

Reconciling this rich diversity and lack of literacy is no small task. The Papua New Guinean government wants to give its citizens the opportunity to develop and flourish in their mother tongues. However, it also wants to give the country an edge in terms of advancing careers and the nation’s economy with the official languages of English and Tok Pisin. But supplying millions of people with education in Papua New Guinea, particularly rural areas that have no written form of communication, is an immense task, and the funding and workers are few.

Fortunately, this project isn’t a one-nation effort; many foreign nonprofits have come alongside the government to help grow education in Papua New Guinea. One of them is Wycliffe Bible Translators. This Christian organization seeks to improve vernacular literacy in several nations, including Papua New Guinea. The organization seeks to create written languages for those who have none with the end goal of translating the Bible into these languages.

The road to translation is not a short nor easy one, though. Reading and writing are not everyday pastimes in traditional Papua New Guinean culture. Children who do go to school often leave in the fourth through sixth grade because many jobs don’t require a lengthy education, or because there is a lack of opportunity for paid employment in rural areas, where subsistence farming is the norm. Without cultivation, these children often lose their literacy skills as they grow older. In order for them to be able to read complex literature like the Bible and understand it for themselves, many need to bolster their basic literacy skills

While their efforts are mainly based in churches, Wycliffe volunteers have realized the necessity of strengthening the literacy skills of the surrounding communities. Research shows that children succeed better in school if they begin their education in their mother tongue and then bridge to a second or third language later on in their schooling. So Wycliffe is coming alongside schools and teachers to help improve learning materials and curriculums to better equip school-age kids. The organization also provides workshops for adult community members to polish their reading and writing skills.

Many Papua New Guineans think that since they know how to fluently speak their mother tongue, they should be able to easily read it. But the jump from having no written language to a brand new alphabet to reading out loud is tremendous. Wycliffe started providing fluency reading exercises to these adult learners. The volunteers help Papua New Guineans become more comfortable with reading out loud, stressing that learning how to read takes a lot of work, no matter who you are or what language you speak.

Aside from the more long-term work that Wycliffe does in partnership with schools, Wycliffe’s language surveyors traverse Papua New Guinea’s jungle-like terrain to meet with rural communities, which may lack written languages and some of the necessary materials for education. Some villages require days of backpacking or helicopters to reach. Once there, the Wycliffe volunteers assess the village’s situation: what the culture is like, what languages the people speak, how many languages exist and more.

The volunteers also take note of what educational resources the villages have. Schools that exist in these remote villages may not have electricity, so accessing new curriculums or books is difficult. Teachers may have to hand-draw materials or walk to towns with printers to get the materials they need. Wycliffe is working with the government and other nonprofits to deliver the necessary resources these villages need to strengthen their literacy.

While Wycliffe volunteers have helped significantly in developing written languages and improving education in Papua New Guinea, there’s still an immense amount of work left. As some languages thrive, others seem to falter and disappear. Languages in rural areas that have only a few dozen speakers often blend into other languages as they become more interconnected.