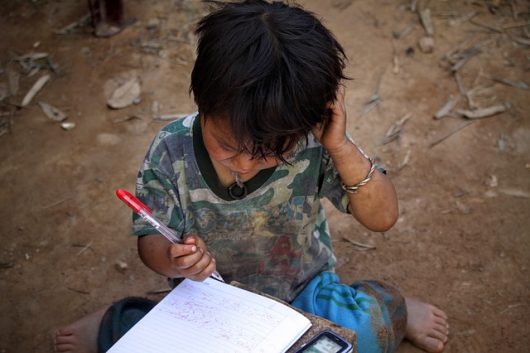 Some of the worst consequences of poverty include:

At first glance, it might be easy to conclude that crime is a cause of poverty and not the other way around. However, poverty can render people hopeless and desperate enough to engage in criminal activities. For instance, a study done by the Edinburgh Study of Youth Transitions and Crime found that, even after controlling for the effects of a range of other factors such as substance misuse and poor family functioning that can influence violent behavior, “poverty had a significant and direct effect on young people’s likelihood to engage in violence at age 15.” Individuals growing up in communities with high levels of deprivation were significantly more likely to engage in violent activities.

Notably, this study found that those from low socioeconomic backgrounds had a greater likelihood of engaging in violence even if they also belonged to a “low risk” background.

Poor children typically attend schools with inadequate facilities and receive the kind of education that hardly provides them with the tools to further their studies or seek employment, thereby restricting them and their children to poverty, which becomes a vicious cycle of poverty across generations. Additionally, geography can dictate if they even get to attend school. For instance, while a poor child in the U.S. can still attend school, a poor child in a rural area of Bangladesh might not have that opportunity. Distance, lack of transportation and financial resources often make it very difficult for poor children in developing nations to get an education.

There are stark differences between children from poor and wealthy backgrounds even in first world countries. For instance, a study done in the U.K. found that by the age of three, poorer children are estimated to be, on average, nine months behind children from wealthy households.

Health is perhaps the one area where poor people suffer the most. For instance, a disproportionately large percentage of diseases in low-income countries are caused by the consequences of poverty such as poor nutrition, indoor air pollution and lack of access to proper sanitation and health education. According to World Health Organization estimates, poverty-related diseases account for 45 percent of the disease burden in the poorest countries. Nearly all of these deaths are either preventable or treatable with existing medicines. For example, tuberculosis, malaria and HIV/AIDS make up nearly 18 percent of the disease burden in the poorest nations. Tuberculosis and malaria can both be prevented and treated, and education is crucial for the prevention of HIV/AIDS.

A recent study done by the United Nations Development Programme found that deprivation and marginalization along with weak governance contribute to violent extremism in young Africans. The study was based on interviews with 495 voluntary recruits to extremist organizations such as Boko Haram and Al-Shabaab and suggests that few economic prospects and little trust in the state to provide services and uphold human rights can lead an individual to partake in violent extremism. The conclusion was derived from the fact that most of the recruits reportedly came from marginalized communities, expressed frustration regarding their economic conditions, and felt an “acute sense of grievance towards the government.”

These are some of the worst consequences of poverty. These effects of poverty prove that, in order to achieve peace and safety in the world, poverty alleviation must be a focus.