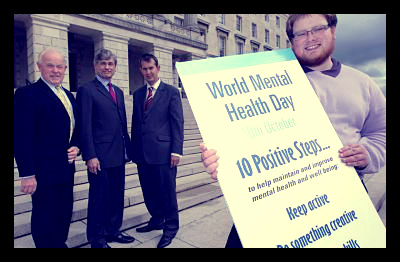 On October 10, 2013, the United Nations and the World Health Organization, among other prominent international organizations, observed World Mental Health Day. Chances are that it wasn’t on your calendar.

When thinking of global health issues, many people include HIV, malaria, cholera, and malnutrition on the list of the most urgent diseases to address. However, despite its extremely dire outcomes, mental illness is often overlooked. The emphasis on communicable diseases often overshadows the recognition of non-communicable diseases.

In the mission to eradicate extreme poverty, increasing global health plays a prominent role. Although mental illness accounts for nearly 14 percent of the global problem of disease, it is often dismissed as too difficult to attend to, specifically in the developing world.

The World Health Organization predicts that by 2030, 14 percent will increase to 20 percent. Unlike many communicable diseases, which are easily recognized by certain symptoms, mental health issues are far more difficult both to diagnose and to properly treat. In poorer countries, the technology and the proper, individualized care is not widely available to deal with these issues.

Mental illness is so ignored in the developing world that a large number of patients in need do not retrieve the proper – or any – treatment. What is called the “treatment gap,” or the gap between the number of people with disorders and the number that actually obtain evidence-based treatment, is as high as 70 to 80 percent in developing countries.

“We don’t think of mental illness as a problem in developing nations,” said Vikram Patel, a psychiatrist at the London School of Hygiene & Tropical Medicine. “And yet it’s even more of a problem in these countries.” Patel is recognized as a leader in the crusade to improve global mental health, calling the current conditions in treatment for mental illness a human rights crisis.

Why has there been no outrage? To put it simply, because many people do not recognize how important and urgent the issue is. In the constant attention given to increasing global health, the threat of mental illness cannot continue to be ignored. The global community has been turning a blind eye on the mental health issues in developing countries, and new measures need to be taken.