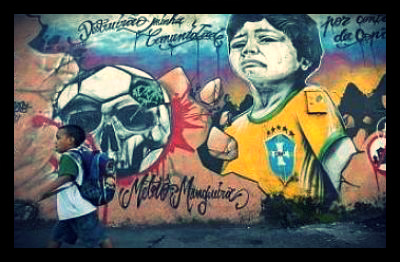 Brazil is set to play host to one of the biggest international sporting events in the world. The World Cup brings in billions of dollars of revenue and puts Brazil on the forefront of the global stage. Brazil is also playing host to the 2016 Summer Olympic Games, which will again place both Brazil’s successes and struggles in the eyes of the world.

Brazil is one of the more developed countries in South America, but it also has a high rate of poverty. According to the CIA World Factbook, as of 2013, Brazil’s poverty rate stood at 21.4 percent, which is one of the highest in South America. According to ESPN, the Brazilian government is reported to be spending over $13 billion on the various stadiums, airport renovations and other sites, while an additional $3.5 billion being spent on venue sites. According to the International Business Times, Brazil’s Institute of Tourism project that international visitors to the World Cup will spend $2.6 billion, while Brazilian residents will spend almost $8 billion, these estimates still fall short of what Brazil’s government is spending.

There have also been reports of forced evictions of hundreds of family’s homes in order to make way for stadiums for the World Cup and the Olympics in 2016. The Huffington Post reported the story of a family who were given no notice or warnings of any kind before several men turned up at their door and proceeded to reduce their home to rubble and ash. The Global Post reports that upwards of 15,000 families have been removed from Rio de Janeiro as well.

However, according to many reports, the potential overall economic impact of the World Cup in Brazil will be about $24 billion, according to Bloomberg, while Forbes reports that Brazil’s Ministry of Sports calculates that Brazil’s economy will receive a $70 billion injection from the games. The International Business Times points out, however, that there can sometimes be a “World Cup effect” on countries where there is a promise of a large injection of capital to boost the country’s economy as a result of the games being hosted there, but in the end, it falls short.

South Africa is a prime example of this “World Cup effect.” South Africa invested nearly $5 billion in various renovations and restorations of buildings and has only made 11 percent of it back as of 2010. Brazil can only wait and see if it will incur a similar fate.

The World Cup and other international sporting events are superb testament to international cooperation and the ability of countries to set aside common goals to celebrate the universal languages of sports. However, a worrying trend in recent years of developing countries pushing aside and marginalizing those who are already marginalized by poverty and inequality is emerging. The responsibility to ensure that these peoples are not forgotten or pushed to the way side for the sake a country’s bottom line and international news coverage rests with those who attend these events as well concerned and socially active citizens around the world.