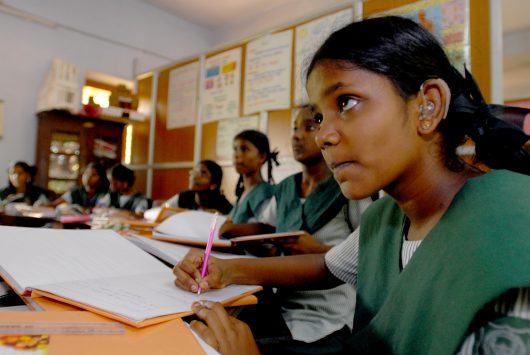 On Feb. 9, 2018, the Bollywood movie “Padman” was released to the largest film market in the world. “Padman” is exactly what it sounds like: a film about a man who creates pads. The Bollywood film chronicles the true story of Arunachalam Muruganantham, India’s pioneer of a revolutionary method of producing cost-effective sanitary pads for women and girls across the country.

The film is more than just a story about someone with a good idea; it is also challenging the stigma that surrounds menstruation and women’s health in India. “Period Poverty” is a global phenomenon that describes a woman’s inability to buy proper feminine hygiene products. In India in particular, the effects of period poverty hinder many girls’ abilities to stay in school. In India, one in four girls miss one day or more of school due to menstruation.

In lower and middle income countries, poor sanitation facilities are one thing that keep girls from attending school while on their period. Many schools in lower income countries also do not have the puberty education necessary to educate girls about menstruation. A recent study found that 71 percent of girls in India have no knowledge about menstruation prior to their first period.

Most cultures around the world also have a major stigma surrounding menstruation. In India in particular, a lot of taboo surrounds the topic of periods and women’s health in general. Restrictions for women on their period include not being able to enter religious shrines or come into contact with food, further keeping girls from school. Many girls are nervous about asking for help in the event of stained clothing due to improper feminine hygiene care.

Another thing keeping women from proper feminine hygiene care is cost. Until recently, 70 percent of Indian women could not afford to buy pads for their family. Instead, families resorted to using and reusing rags which quickly become unsanitary as breeding grounds for disease. In rural areas, materials other than rags were often used like sawdust or ash.

There are currently many NGOs operating around the world with the goal of creating affordable solutions for women suffering from period poverty. Many of these organizations are dedicated to solving issues of women’s health in India.

Innovator Arunachalam Muruganantham has created a machine that makes sanitary pads that are sold mostly to NGOs along with women’s self-help groups. The machine comes in two different types, a manual version and a semi-automated version. Each machine can make 200 to 250 pads a day and is designed to be user-friendly for women living in rural areas.

The pads sell for about 2.5 rupees, almost half of what it would be to buy them commercially. This system not only provides proper sanitary products for women, but also creates jobs for women living in rural areas as they learn how to use and operate the machine. Muruganatham has expanded his efforts well beyond India and is now working in 106 countries around the world.

An organization created in 2008 called Days for Girls is dedicated to improving women’s health around the world. The organization aims to provide girls with invaluable health education and provide its recipients with a Days for Girls kit. Each kit contains sanitary napkins, washcloths, soap, a menstrual chart and underwear. This is just one example of the many organizations fighting to end the stigma surrounding periods.

India is the largest film market in the world, with 2.2 billion movie tickets sold in 2016. Hopefully, the recent film, “Padman,” will reach a wide variety of audiences and bring more attention to issue of women’s health in India.