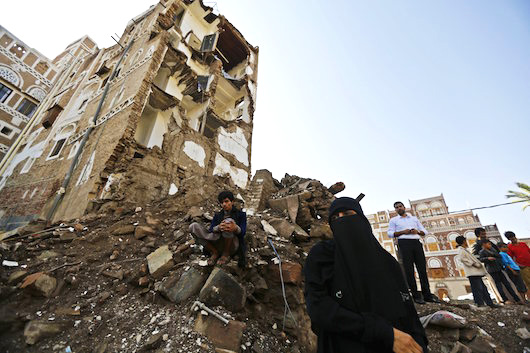 Ongoing conflict in Yemen continues to take its toll on the civilian population. According to the United Nations Coordination of Humanitarian Affairs (UNOCHA), 21.2 million Yemeni civilians of the total 26 million in the population are in need of humanitarian assistance.

15 million people no longer have adequate healthcare as a result of the conflict in Yemen. Fuel and medical supply shortages have severely hindered functioning of hospitals and health facilities.

The World Health Organization (WHO) is currently working with other health partners to “ensure the continuity of health services” in Yemen.

Mobile clinics, for example, serve as “primary healthcare centers” in more remote areas of the country. WHO, partnered with Field Medical Foundation, have set up mobile clinics which specifically cater to the treatment of children between six months and five years of age in Aden, Lahj and Hadramout.

Approximately one million liters of fuel have been delivered to health facilities. The WHO and the International Committee of the Red Cross (ICRC) have been working together to bring water to different regions of the country.

According to BBC security correspondent Frank Gardner, the conflict in Yemen began in the 2011 Arab Spring.

In an attempt to contain protests within Yemen’s borders, Yemen and its Gulf Arab neighbors made a deal that ultimately led to the replacement of President Ali Abdullah Saleh by Abdrabbuh Mansour Hadi.

In retaliation, Saleh supported a rebellion by Houthi rebels in late 2014. By January 2015, President Hadi had lost power and immediately made for Saudi Arabia, where he currently lives in exile.

Yemen now finds itself torn between Houthi/pro-Saleh forces in the West and Hadi forces in the East. As the fighting continues, WHO and other organizations continue to make major efforts toward supporting Yemeni civilians caught up in the violence.

How Many Refugees are in the US? – Facts, Figures & History Google Launches Wi-Fi in Uganda
Scroll to top