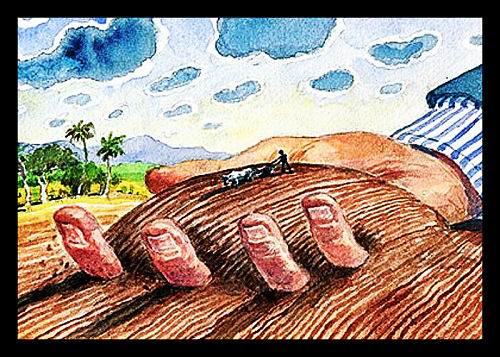 It is assumed that the already existing gap between developed and developing nations is large and apparent enough that wealthier nations would try and fill this gap and bring these opposite ends closer together. According to an ABC Environmental article, however, wealthy nations are instead competing over ‘land’ and ‘water grabbing’ to appease their growing populations and the “stressed” supply of basic necessities such as food and water. Investors in a foreign land, or better yet, the land-grabbers, are countries and investment firms from biofuel producers to large-scale farming operations (agricultural investors).

Since 2000, the major countries that have contributed to this land purchasing are the U.S., Malaysia, the U.K., China, and the U.A.E. Experts aren’t sure of these investors’ motives but it is clear that they are only focusing on buying land where there is clear access to water.

‘Land grabbing’ is defined by Paolo D’Odorico, a professor at the University of Virginia, as “a deal for about two km2 or more that converts an environmentally important area currently used by local people to commercial production.” According to an environmental study, 454 billion cubic meters sums up the ‘water-grabbing’ per year by corporations on a global scale, which is about 5 percent of the world’s annual water consumption. According to the public database Land Matrix “1,217 deals have taken place, which transferred over 830,000 square kilometers of land” since 2000, with 62 percent of such deals happening in Africa alone.

From 2005 to 2009, during a major food price crisis, land purchases, which fall under a very low level of regulation, skyrocketed. In 2011, the Food and Agricultural Organization of the U.N. released guidelines that advise investors to consider the people and communities whose land is being used. However, such guidelines are viewed as humanitarian concerns and have little enforcement, meaning that they aren’t strict enough to have corporations and investors abide by them or even care for them.

Governments who are interested in and have been leasing and selling land to foreign countries and investors are mainly those in Eastern Africa and Southeast Asia. They are interested in these sales because they want to modernize their farming and believe this is the way to do it. However, the reality is that the resulting development from such ‘land and water grabbing’ depends on the investors’ terms and conditions, as well as their sense of morality.

The main problem is that the majority of these sales are happening in poor countries in which there are high rates of hunger and where resources valuable to the local populations are being purchased by wealthier developed nations or even by private corporations. The main question of the matter is this: Who is benefiting from land and water grabbing? Are these sales helping the local people since it is their land? Or are these purchases only concerned about foreign benefits and the population concerns of developed nations?