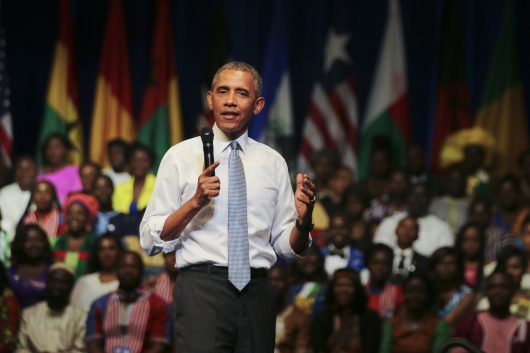 President Obama spoke about the importance of advancing global development at the White House Summit on Global Development this past July. He focused his speech on development as a “key pillar” of his foreign policy and reassured that it would remain so for the next president.

The Obama Administration has funded global projects such as reducing poverty and encouraging global economic growth and stability. These programs add to former President George W. Bush’s efforts to focus on fighting global disease through the President’s Emergency Plan for AIDS Relief (PEPFAR).

According to the official White House website, Obama’s U.S. Global Development Policy that he issued in 2010 was the first time that “global development was elevated, on par with diplomacy and defense as a core pillar” of U. S. policy. Following Bush, Obama and his administration have continued to focus on solving global issues throughout his time in office.

Susan Rice, the National Security Advisor, wrote in a Huffington Post article about why it is so important that Obama is dedicated to development. “Development is not a charity – it is a prudent investment in the security and prosperity of us all,” she wrote. Development is an investment that helps to stabilize global conditions and to create opportunities.

Rice wrote that Obama’s White House Summit on Global Development will help to support global economic growth, to improve food security and nutrition, to improve global health, and to invest in leadership. The programs already supporting these causes, like the United Nations’ Sustainable Development Goals and Feed the Future, will all help to eradicate poverty and secure a prosperous future through the continued support of global leaders and organizations.

Obama’s White House Summit on Global Development will hopefully mobilize already existing aid and development programs of all kinds. With goals to advance development in a variety of ways, the Summit will hopefully help to expedite poverty reduction efforts and stabilize global conditions.