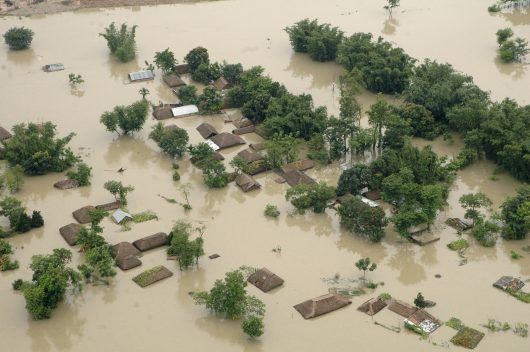 At the end of 2015, there were 65.3 million refugees worldwide. The global community is struggling to provide resources for the world’s displaced peoples, and the situation has caused both economic and security issues. Many people are ignorant to the fact that there is another group of people who are extremely vulnerable to losing their homes.

Climate refugees, or environmental migrants, are forced to leave their homes because of climatically induced environmental changes or disasters. Specifically, people may be displaced because of drought, a rise in sea level, ecological changes, desertification or extreme weather patterns. Protecting climate change refugees grows increasingly relevant as the number of displaced peoples across the globe continues to skyrocket.

Since 2008, an average of 27 million people have been classified annually as climate refugees and in 2009, the Environmental Justice Foundation declared that nearly 10 percent of the world’s population were at risk in terms of losing their homes to climate change related issues.

As climate change continues to spread and develop, more and more people fall victim to environmental migration. The existence of environmental migrants proves that climate change is not solely about the environment and that its effects reach into many aspects of society, including politics, health and economics. Protecting climate refugees is important, as sources have suggested there could be as many as 50 to 200 million by the year 2050, most of these people being subsistence farmers and fishermen.

Just this year, the U.S. resettled its first climate refugees. The population is from the Isle de Jean Charles in southeastern Louisiana and they had to leave their homes due to severe flooding. In order to resettle its residents, the U.S. government has put forth a $48 million grant and has realized the harsh reality of this problem.

According to the International Organization for Migration, “Climate refugees often fall through the cracks of asylum law.” Currently, it is very difficult for an environmental migrant to achieve refugee status. The term “climate refugee” is not officially recognized by international law and according to the International Bar Association, “there are no frameworks, no conventions, no protocols and no specific guidelines that can provide protection and assistance for people crossing international borders because of climate change.”

The World Bank estimates that with a 1-meter rise in sea level, Bangladesh would lose close to 20 percent of its land mass. Currently, almost 200,000 Bangladeshi’s lose their homes annually due to river erosion and rising sea levels. The islands of Kiribati, Nauru and Tuvalu are already facing significant migration patterns due to the rising sea.

The lack of international protocol regarding climate refugees, such as the ones from Bangladesh and the small islands in the Central Pacific, means that there is also a lack of resources and pathways that can lead these people to a successful resettlement. Because of this, migration experts have been stressing for several years that at risk countries should first look into improving living conditions for vulnerable populations.

This includes helping them secure a consistent access to food and water, rebuilding infrastructure and establishing efficient emergency warning systems. As countries become more aware of their ecological situations, there is more pressure to provide resources for potential climate refugees.

In order to protect climate refugees, there needs to be a change in the international law that defines a “refugee.” The number of people affected in a negative way climatically grows by the day.

Besides advocating for universal policies regarding climate refugees, there are things that can be done to slow climate change and its negative effects. Supporting clean energy and anti-carbon emission related legislation can make a difference in improving the lives of communities who are vulnerable to environmental migration.

Preparing for Natural Disasters in MyanmarThe TPP: Patents and the Price of Medicine
Scroll to top