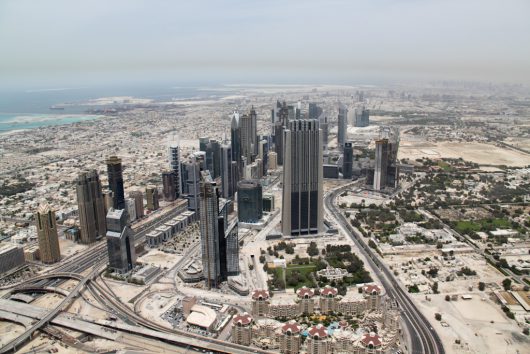 From a small pearl fishing village to one of the richest cities in the world, Dubai has made quite the journey. Dubai is the largest and most populous city in the United Arab Emirates and is home to the tallest building in the world, the Burj Khalifa.

People believe that wealth in Dubai stems from its oil industry. However, it only accounts for about 7 percent of its total revenue. The big bucks are in Dubai’s real estate.  Reports show that most of the state’s $82.11 billion in revenue come from its investment in real estate, airlines, and sea ports.

Dubai has shown that its population has no plans to hold onto its wealth.  The city has made tremendous strides toward the eradication of global poverty and plans to continue to do so until it is eliminated.  Forty-six years after the foundation of the UAE, international aid provided by its government and non-governmental organizations has been estimated at $15.23 billion.  This international support using wealth in Dubai makes it one of the world’s largest contributors to foreign aid.

“Foreign aid and assistance are one of the basic pillars of our foreign policy.  For we believe that there is no true benefit for us from the wealth that we have unless it does not also reach those in need, wherever they may be, and regardless of their nationality or beliefs,” founder and former president of the UAE Sheikh Zayed bin Sultan Al Nahyan said.

The majority of Dubai’s foreign aid goes to programs that focus on the assistance of the poor, healthcare, energy generation, transport and storage.  In recent years, the state has put an emphasis on the pursuit of solar energy.

Dubai’s leaders say that sustainability and clean energy are priorities for any long-term resolution to issues created by poverty.  They say that further investment in solar energy will lead to its use in emergency operations, schools, refugee camps and other aid processes of this kind.