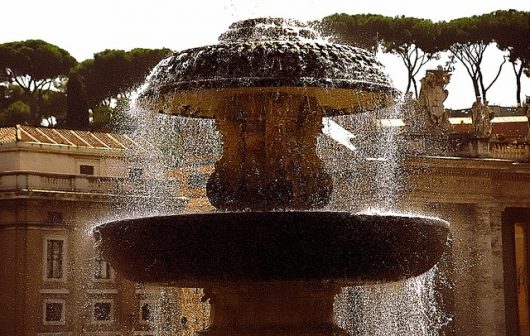 Home to the St. Peter’s Basilica, the Sistine Chapel and the Apostolic Chapel, Vatican City is one of the most sacred places in Christendom.

The sovereign city-state is contained within a walled enclave inside the city of Rome, giving it the distinction of being the world’s smallest country.

Main water resources in the city-state include the surface water from rivers and wetlands, groundwater from rocks and soil and treated government water supply. Water quality in Vatican City is good, thanks to the proliferation of drinking water fountains that take water directly from the mountains above the city.

Called “Nasoni” in Italian, the drinking water fountains in Rome are seen as inexpensive, environmentally-friendly options. The water is reportedly tested by the authorities about 250,000 times every year, ensuring that water quality in Vatican City is completely safe. Conveyed by an aqueduct to the drinking water fountains, an abundance of water means that a single family has more than 140 gallons to drink.

However, as recently as July 25, Vatican City decided to shut off all of its 100 decorative and drinking water fountains for conservation purposes because of a drought in Italy.

“The drought that is affecting the city of Rome and the surrounding areas of the capital has led the Holy See to take measures to save water,” the Vatican City’s website said. The statement also noted that the water-saving move was “in line with the teachings of Pope Francis.”

Pope Francis has repeatedly emphasized the issue of water security and water quality in Vatican City and around the world.

Earlier this year, the Pontifical Academy of Sciences of Vatican City and the Catedra Del Dialogo y La Cultura Del Encountro of Argentina convened a diverse panel of experts from all over the world in a conference titled, “Human Right to Water: An interdisciplinary focus and contributions on the central role of public policies in water and sanitation management.” Members explored solutions to the global water challenges, including how to make drinking water safe and accessible to the neediest of people and communities.

At the conference, Pope Francis highlighted the importance of water and noted an important distinction between providing life-giving water and water that is safe and of good quality. Noting that every day, thousands of children die due to water-related illnesses, he urged scientists, government leaders, businesspeople and politicians to foster a shared “culture of care and encounter” and hear “the cry of the earth for respect and responsible sharing in a treasure belonging to all.”

Furthermore, Pope Francis’ comprehensive encyclical, Laudato Si’ (On Care For Our Common Home), explains the Holy See’s views about the importance of good water quality: “In fact, access to safe drinking water is an essential, a fundamental and universal human right, because it determines the survival of people, and this is a requirement for the exercise of other human rights.”

As Italy struggles to respond to the drought crisis, both in and outside the Vatican City, Pope Francis has already inspired a global conversation centered on the values of the planet’s single most precious resource: water.