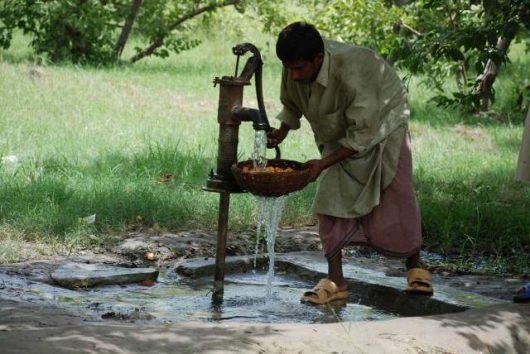 In Pakistan, water contamination is a serious issue, one so substantial that in August of 2017, up to 60 million people were found to be at risk of having arsenic in their water supplies. Further, the level of arsenic allowed in Pakistan’s water sources is five times higher than the World Health Organization’s (WHO’s) guidelines for arsenic concentration in drinking water, with Pakistan allowing 50 micrograms per liter and the WHO allowing only 10.

This specific issue of arsenic contamination points to a broader theme of water contamination on the whole. Water supply lines are often located directly adjacent to uncovered sewage lines, causing water contamination to be so prevalent that 40 percent of all ailments in Pakistan are the result of water-borne illnesses. Further, access to clean water in Pakistan is not recognized as a national right but is seen as a responsibility which local governments are meant to take on. This means that such access fluctuates depending on the area, although infrastructural support for a clean water system is, on the whole, dismal.

The scarcity of clean water in Pakistan has allowed extremist groups to use water as a focal point of their recruitment process. Lakshar-e-Taiba, an extremist group that perpetrated the 2008 Mumbai terror attacks in which 172 people were killed, has accused India of committing “water terrorism,” citing such as motivation for terrorist actions in India. By exploiting the issue of water, an issue which every Pakistani citizen is forced to deal with in order to survive, extremist organizations are able to reach larger swathes of the “common man” and augment grassroots support. Thus, the issue of water in Pakistan goes beyond simple health problems and infiltrates international security issues as well.

The wide berth of the problem has initiated an increase in the bottled water industry, but the reality is that such is still financially inaccessible to the majority of low-income individuals, forcing low-income communities to rely on easily contaminated groundwater. In order to address this, an organization called Pharmagen has entered the scene. Pharmagen ensures its water is affordable for low-income customers, requiring only two rupees per liter. It operates through a chain of open water shops that extracts groundwater and purifies it to meet WHO standards before distributing it to the impoverished communities it serves. Currently, the organization provides more than 100,000 liters of potable water per day in Lahore alone and seeks to expand to include 32 additional open water shops while also adding one bottled water facility.

Yet, it is important to note that 21.6 million people in Pakistan still have no access to clean water, and this is a hotbed for extremist activities. The work of organizations such as Pharmagen is both admirable and necessary, but it is also necessary that the international community step up as a whole; the issue of water in Pakistan ultimately goes beyond Pakistan-specific problems, due to its relationship with international extremist organizations. In a world teeming with terrorist activities, it would appear that mitigating grassroots extremist movements by improving access to clean water should have a greater presence on the world stage.