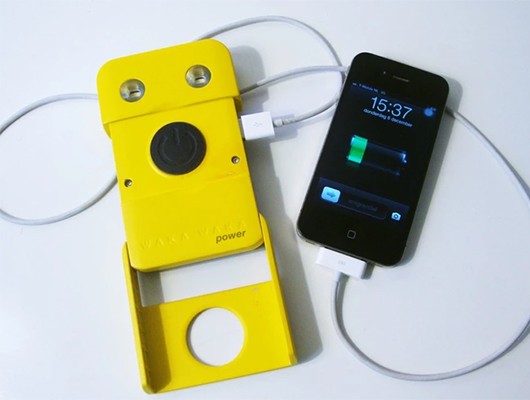 The Personal Solar Power Station is energizing Haiti with a mission to bring the 1.3 billion people in the world without electricity the basic right to energy.

Energy poverty’s progress has been regressing in over a quarter of the world’s population. According to the WakaWaka site, hundreds of millions face regular blackouts, and, even if they have access to kerosene lamps, they are extremely inefficient, dangerous and expensive, and also pose risks to health and the environment.

WakaWaka, which translates to “Shine Bright” in Swahili, works to create and market advanced solar-powered lamps and chargers at affordable costs. WakaWaka works to replace kerosene lamps with safer, cheaper and more sustainable energy sources, and their off-grid solar powered products do just that.

Intivation, a mobile solar products manufacturer, partners with WakaWaka Light to patent and distribute the most efficient models for solar technology.

The self-proclaimed impact-driven social venture fights to abolish energy poverty throughout the world with its original lamps. Currently, WakaWaka Power produces the “most compact power station in the world.”

What began as a kickstarter via crowd funding developed from a “buy one, give one campaign” to a full-blown sustainable enterprise and benefit corporation.

Maurits Groen and Camille van Gestel launched WakaWaka in 2010. They looked to revolutionize the energy market in South Africa by designing “an ultra-efficient LED lamp.” The award-winning model took first place in an international competition for emission-reduction ideas. WakaWaka’s bright future developed in its vision for bringing South Africans living off the electricity grid the chance to try solar-powered lamps.

Five years running, WakaWaka found partners around the world, from NGOs to national and local companies. WakaWaka lamps are charged by nothing but the sun. As of 2013, more than 12,000 LED lamps were provided to Haitian communities without electricity. WakaWaka also provides its lamps to Syrian refugees and those hit by typhoon Haiyan in the Philippines.

Mali, Liberia and Indonesia have also been impacted by WakaWaka’s off-grid lighting solutions. So far, WakaWaka has been established in more than 200 aid, crisis, and relief projects among developing nations.

The business model follows that all proceeds made from Western purchase go toward making them freely available to off-grid areas around the world at much lower prices.

As if WakaWaka was not doing enough, every WakaWaka product sold in the United States donates a WakaWaka Light to The International Rescue Committee, one of the world’s leading humanitarian aid organizations that has helped deliver tens of thousands of WakaWakas in regions that need them most.