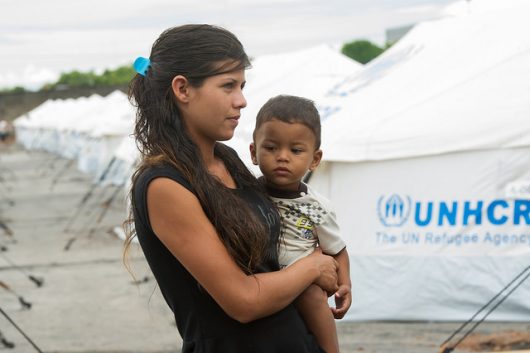 Venezuela is currently in the midst of a humanitarian aid crisis spanning nearly ten years. As a developing country in South America, Venezuela has rich natural resources but suffers from an often harsh government that has not been cooperative with foreign NGOs in the past. Though NGOs operating in and outside of Venezuela are key to solving serious dilemmas in the areas of health, human trafficking, and education, the important thing in solving the crisis is an improvement of the strained relationship between the country’s government and foreign input.

The Venezuelan Crisis began in 2010 under the presidency of Hugo Chavez and has continued into the second six-year-term of current president Nicolas Maduro. The Venezuelan crisis has its roots in the country’s rich oil reserves, which under encouragement from Chavez (1999-2013), composed the majority of Venezuela’s earnings from exported goods.

Social programs were created with the influx of oil money, but when oil prices dropped in 2014 these programs were scaled back, and many Venezuelans began to struggle. Inflation has continued to rise steadily since 2012 and currently, Venezuela has the highest rate of inflation globally at 18,000% as of April 2018.

The political landscape of Venezuela has been tumultuous, yet ironically rigid in the transfer of power from Chavez to Maduro. Being hand-selected by Chavez to succeed him before his own passing, Maduro’s leadership has been marked with rumors of corruption, election fraud, and instances of police brutality against protestors and the unlawful imprisonment of political rivals.

As the government continues to deny foreign aid and refuses to allow foreign companies to invest in resident NGOs, the situation is becoming a humanitarian crisis worsened by the inability of aid organizations to alleviate the suffering of Venezuelan citizens. Despite these setbacks, multiple agencies are working hard to help the people living in Venezuela.

Due to extreme poverty caused by the Crisis, many Venezuelans are left vulnerable to human trafficking, an issue running rampant in this region of Central America. Those abducted are usually women and children, though men are taken as well. In often cases, the victims have moved from a rural area to an urban location, lured by the promise of higher earnings.

The Venezuelan government has done very little to eliminate this serious issue. The U.S. Department of Labor noted in 2017 that the Venezuelan government did not report any data whatsoever on human trafficking, and did little in the past year to combat the issue besides the arrest of seven individuals involved in human smuggling.

Venezuelans also face police brutality, lack of hospitals and medicine, and a nationwide shortage of food and clean water. As thousands of refugees pour out of the country, foreign NGOs are becoming more desperate to help. Some NGOs have banded together in order to fight the Crisis.

The most significant humanitarian cooperative spearheading foreign relief efforts in Venezuela is Cuatro Por Venezuela, a Houston-based collective of 12 NGOs working together to fight the humanitarian aid crisis. The collective utilizes the resources of a vast web of partners and NGOs operating in Texas, Florida, and Chile.

Though Venezuela’s government seems likely to deny foreign aid for the foreseeable future, the Venezuelan Crisis can still be alleviated by the collective efforts of NGOs in and outside this central American nation. Cuatro Por Venezuela represents the beneficial results produced when cooperation occurs between humanitarian groups.