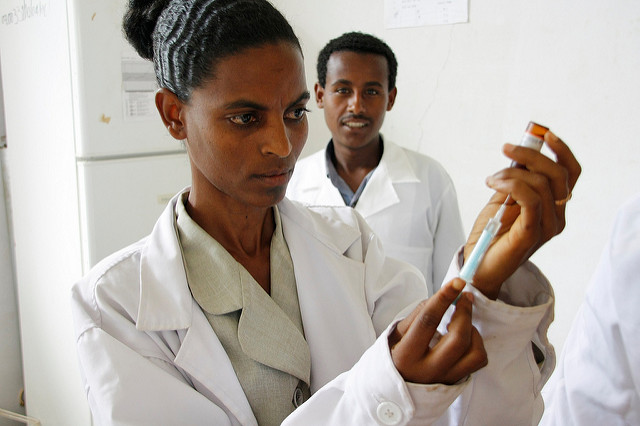 Vaccines are known to save lives and protect against diseases, but now can be credited for preventing poverty as well. A study done at Harvard University alongside Gavi, the Vaccine Alliance researched the economic effects of vaccines for 10 different diseases in 41 developing countries. The study concluded that vaccines would help to prevent 24 million people throughout the world’s poorest countries from falling into poverty by the year 2030. The study also estimated that vaccines given between 2016 and 2030 would prevent the deaths of 36 million people.

Vaccines contain the same antigens that are responsible for causing diseases. The antigens in the vaccines are killed or severely weakened and are unable to cause the disease, but are strong enough to allow the body’s immune system to produce the antibodies needed to become immune to the disease. Therefore, the protection comes without the child having to be sick or suffer from a disease. This reduces the cost of healthcare for families and allows them to save and spend more money, boosting the country’s economy.

Dr. Seth Berkley, the CEO of Gavi, talked about the effects on a child who receives vaccinations and their school attendance. He stated that a child who is healthy is more likely to attend school and become a productive member of society, and their families will not be obligated to pay the expensive healthcare costs that come with diseases. Healthcare expenses cause about 100 million people to fall into poverty each year, as medical treatment is one of the main reasons families are forced below the poverty line. With the use of vaccines, countries will be better protected from both disease and poverty.

The greatest poverty reducer will be vaccinations, by reducing the number of people who are living in poverty due to hepatitis B. Gavi anticipates this will help 14 million people avoid medical impoverishment. Poverty cases that are due to measles will be reduced by vaccines, which is anticipated to prevent 5 million cases as well as preventing 22 million deaths. Disease and poverty are linked through a cause and effect in that medical costs cause poverty in many developing countries.

The study also showed that the poorest 20 percent of the global population represented more than one-fourth of deaths that can be prevented by vaccinations. Furthermore, the study concluded that introducing vaccines in the poorest countries would have the largest impact on lowering the number of deaths and the number of people falling into poverty due to their medical expenses. Therefore, vaccines prevent both disease and poverty.