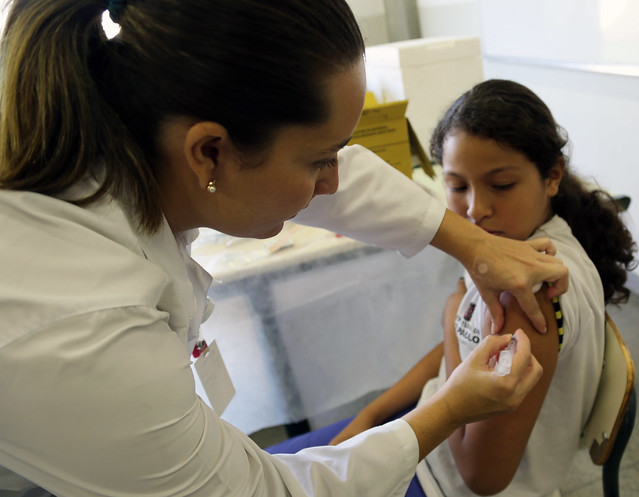 Vaccine hesitancy, the reluctance or refusal to vaccinate despite the availability of vaccines, has been around since the invention of the vaccine. Recently, there has been an increase in vaccine hesitancy in developing countries due to safety concerns and long-term effects. With this skepticism, outbreaks of vaccine-preventable diseases that were once thought mostly eradicated such as measles, pertussis and diphtheria, have increased in frequency around the world.

This year, the World Health Organization named vaccine hesitancy one of the top 10 threats to global health. Vaccines remain the safest and most cost-effective ways of preventing diseases. Currently, vaccines save between two and three million lives a year.

Furthermore, if coverage improves, vaccines can save an additional 1.5 million lives per year. The reasons for vaccine hesitancy are complex, but a vaccine advisory group identified complacency, inconvenience in accessing vaccines and a lack of confidence as some of the root causes. With these factors identified, if now becomes a question of how to fight these causes of vaccine hesitancy in developing countries.

Some health experts have theorized that vaccine skepticism stems from the fact that vaccines are so effective that parents no longer remember or fear vaccine-preventable diseases like measles and polio. Instead, they may focus their anxieties on the safety of vaccines, effects or the number and timing of injections.

Without a proper understanding of the devastating effects of these diseases, parents have less of a motivation to vaccinate. EU Health Commissioner Vytenis Andriukatis said at an international health conference, “We have become victims of our own success.”

Vaccine hesitancy in developing countries is often bolstered by the need for medical infrastructure. Inadequacy and the inequities in health systems like poverty, the disparity in infant mortality and life expectancy and a need for trained providers damages community trust.

To combat this, many countries have implemented mandatory vaccinations in schools, with mixed results. In India, for example, during their measles and rubella vaccination campaign, parents objected to their children being vaccinated without their consent, stalling the campaign in court.

Rwanda, on the other hand, was successful in its HPV vaccination campaign by coupling it with an information campaign. The campaign targeted parents and explained the need for this vaccine.

Much of the anti-vaxxer movement is built in misinformation. Vaccine hesitancy in developing countries often stems from rumors about vaccines. For instance, that the polio and HPV vaccines caused infertility and impotency. The movement stems from general concerns about the safety of vaccines.

Health workers, especially those operating in the communities, are the parents’ most trusted health advisors and act as the biggest influencer of vaccination decisions. Because of their position, they must be supported so that they may provide parents with credible information. The most effective campaigns to fight vaccine hesitancy in developing countries are the ones that tailor to the community. Healthcare workers in the community are vital for implementing these campaigns.

In Rwanda, for example, healthcare workers went door to door to explain the benefits of the HPV vaccine. They focused on the fact that the vaccination is meant to prevent cancer. The workers brought diagrams of the female reproductive system. They also dispelled rumors by explaining that cervical cancer is far more likely to cause infertility than vaccines. Because the campaigned was tailored to the community, it was met with a lot of success.

While there is an increase in vaccine hesitancy in developing countries and around the world, immunization campaigns are experiencing successes. Transmission of wild poliovirus, for example, may stop in Afghanistan and Pakistan this year. Additionally, cervical cancer may be eliminated in 181 countries by the end of the century.

To keep this up, health officials have to be proactive in fighting vaccine hesitancy in developing countries by fighting complacency, making access to healthcare more convenient and building confidence by creating programs tailored to the community.