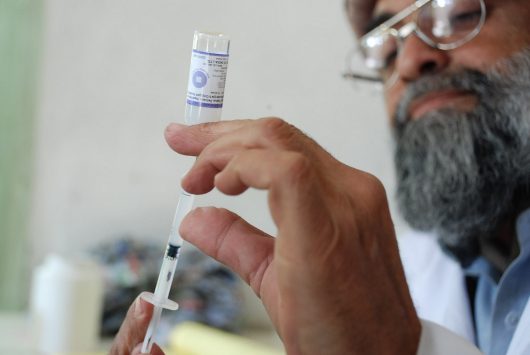 Vaccination has perpetually been a vital aspect of the fight against poverty. Global health is one of the most imperative causes and immunization is the foundation for global health. Consequently, organizations like GAVI, WHO, MSF and UNICEF have put in their combined efforts into promoting this cause. Their endeavors have also highlighted how vaccination can combat poverty.

The efficient provision of vaccination and immunization schemes has been augmented by the exponential progress that the medical field has experienced over the past few years.

An estimated 2-3 million children, 1.5 million of which are under the age of five, die every year due to diseases that could have been averted by more readily available vaccines.

Moreover, the rapid yellow fever outbreak that has plagued Angola, along with neighboring Kinhasas and Kwango, is being closely monitored by MSF. As yellow fever can lead to death for 15-50 percent of associated cases, Congolese people in the region are especially threatened.

Fortunately, the entire city of Matadi was successfully vaccinated. This move has culminated in the establishment of more vector-control activities for the people. This will especially be efficacious in improving awareness on household protection.

The inaccessibility of the pneumococcal vaccine has endangered the lives of countless children in developing countries. This malady affects millions of children all over the world.

Despite Pfizer’s advancement in this aspect, MSF has tried to rebuff its patent application as it sees it as a form of monopolistic competition because it restricts the development of the vaccine by other entities.

Furthermore, higher prices for the vaccine will be detrimental as it would not be affordable for people from lower socio-economic backgrounds. Therefore, it is imperative that vaccines of this nature be both affordable and easily accessible.

Vaccination has also played a pivotal role in the U.N. health agency’s emergency response in Nigeria. The polio vaccination programs have been an integral aspect.

Similarly, the Gombe state government of Nigeria approved the polio immunization of 900,000 individuals who have traveled from disputed areas under the control of the Boko Haram militant group. Vaccination can combat poverty by this method as it is a precautionary regulation that can alleviate the pressures of mass influx.

In addition to this, the steady progression that has been made with regards to Zika vaccine trials has accentuated the sense of urgency that is needed to address this crucial issue.

Consequently, the recently proposed approval for the performance of Zika clinical trials on humans will pave the way for a breakthrough that could help thousands of communities in the Americas. The upcoming launch of the leprosy vaccine in India also echoes this resonance of hope.

The GAVI Alliance has invested an exorbitant amount of $800 million for bolstering health care sectors in developing countries. Such maneuvers will hopefully result in stimulating the interests of private and public sectors in the country towards the cause.