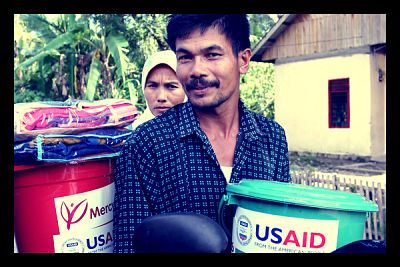 Every year the Samuel J. Heyman Service to America Medals (Sammies) pay tribute to the United State’s federal workers by recognizing those who have made significant contributions to the U.S. Medalists are honored based on their commitment, innovation, and the impact of their work on addressing the needs of the nation.

This year USAID worker and her team are one of the finalists for the 2013 National Security and International Affairs Medal, one of the eight Sammies medal categories. Cara Christie and USAID’s Horn Drought Emergency Response Team are among the finalists in this category for their tireless endeavors in leading the relief effort following the drought in Ethiopia, Somalia, and Kenya in the Horn of Africa. Christie coordinated the relief effort from her office in Washington D. C.,  providing immediate emergency relief to the affected countries and enacting methods to improve their agrarian economies after they had been decimated by three years of the worst drought that the Horn of Africa has ever seen.

Not only did Christie lead the relief efforts, but she is credited with recognizing the significance of the impending famine almost a year before it unfolded. Christie convinced her superiors in USAID of the need to be proactive by making advance preparations in the fall of 2010—a move that hastened aid to the region and saved lives. Christie used lessons learned from other drought response situations to come up with a program pairing health, nutrition, water, and sanitation program with food and voucher programs that helped repair the damaged economies in the Horn of Africa.

It may seem strange that an award given for service to the United States could be received by a team dedicated to giving relief to another country, but in reality Christie’s actions were crucial to U.S. national security interests. The Horn of Africa represents one of the regions of the world that most threatens U.S. national security because it houses some of the most conflict prone states in the world, including Somalia, Eritrea, and Ethiopia. It also is in close proximity to Yemen, a major center of U.S. counterterrorism action. The U.S. also houses the military base Camp Lemonnier in Djibouti on the Horn of Africa, which serves as the most important staging ground for U.S. counterterrorism efforts in Africa and the Arabian Peninsula.

Aid efforts in the region, along with in the rest of the world, contribute to stability and thereby hold radicalization at bay, furthering U.S. interests, and making the U.S. more secure.

How Do Kenyan Men React to New Marriage Bill?5 Quotes About Changing the World Through Education
Scroll to top