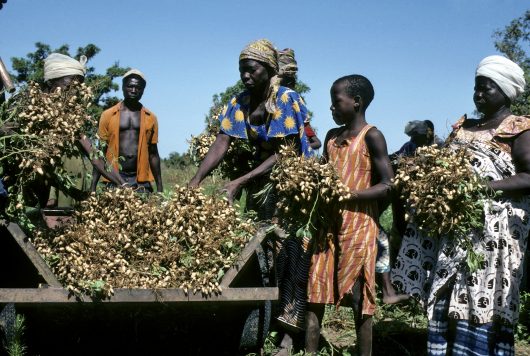 The U.S. Department of Agriculture plans to ship 500 metric tons of surplus peanuts to Haiti to feed nearly 140,000 malnourished children before the fall school semester begins.

Its March 31st announcement has met criticism from Haitian peanut farmers, manufacturers, concerned citizens, and a variety of both Haitian and foreign NGOs.

Many have called the action “crop” or “peanut dumping” that will negatively impact the Haitian economy and its people, pointing to the example of the impact of subsidized rice on the Haitian market years ago. Others point to the need to feed thousands of malnourished children.

As the USDA describes, the action is a part of the “Stocks for food” federal program that sends surplus goods to feeding programs and food banks both in the United States and abroad. The specific Haitian project that targets primary schools struggling against poverty, malnutrition and disease receives its funding from the McGovern-Dole International Food for Education and Child Nutrition Program.

However, many believe that sending cheap stock like peanuts to Haiti could negatively impact the country’s ability to sustain its own food production and undermine the local economy.

Partners in Health released a statement urging the USDA to reverse its decision. A letter to the USDA from the Institute of Justice and Democracy in Haiti points out that peanuts are fundamental to the country’s economy as 150,000 local farmers produce 70,000 metric tons, much like rice was a staple of Haitian market in the mid-1990s.

Floods of foreign, mostly U.S.-produced rice drove the price of Haitian rice down, and many farmers were left without income and forced to leave to find work elsewhere.

The Haitian economy and food security depend strongly on peanuts, especially in their role in the production of a spicy peanut butter called Mamba, which provides income for a large number of Haitian women.

Bill Clinton has been repeatedly quoted acknowledging the export of rice to Haiti as a mistake and the “lost capacity” it caused. While it benefitted U.S. farmers, he said, it hurt Haitian ones.

Alexis Taylor, deputy undersecretary for farm and foreign agricultural services at the USDA, has defended the shipment of surplus peanuts as a source of much-needed relief for a poverty-stricken country in which one-third of all children’s deaths are caused by malnutrition.

The peanuts will be a supplement to Haitian school children’s morning snack as part of the U.N. World Food Program.

In contrast to the USDA’s action, the U.S. has funded other programs such as the World Food Programme that support locally sourced food production and procurement in Haiti.

These efforts to encourage Haiti’s self-sustainability and independence from foreign aid could be compromised by the USDA’s pending peanut program. Critics say it would be better to continue efforts to help Haitian peanut farmers produce better, bigger crops as programs like the Feed the Future Initiative, the Clinton Foundation, and Partners in Health aim to do.

However, the White House petition against the donation failed to receive enough signatures and closed.

USDA press secretary responded to NPR’s article stating that the USDA worked with the WFP to ensure the donation of surplus peanuts would have no negative impact on Haiti’s domestic peanut market by limiting the peanuts’ consumption to only be at school and closely monitoring the impact.