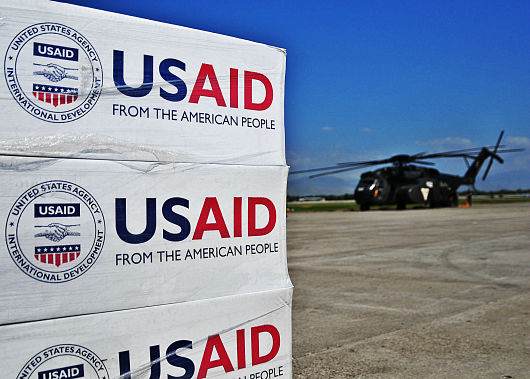 Foreign aid is a broad term that defines the assistance of one country to another, usually a developed country helping another nation. This assistance can be monetary or otherwise and can be intended for many different purposes or reasons.

The origins of foreign aid in the United States stem from the Marshall Plan and the U.S. assisting Europe in its post-World War II recovery. More recently, the United States Agency for International Development’s stated mission is to help fledgling democracies and end extreme poverty.

Most people in the U.S. believe that foreign aid is substantially higher than its actual value, which is equivalent to or lower than one percent of the federal budget. The money sent to other countries as aid is fairly small for the U.S., yet it is capable of producing a host of benefits for the recipient countries.

Humanitarian assistance is the most common reason for giving foreign aid. The recent earthquake in Nepal triggered a response by USAID whose contribution of over $47 million have been used to help with disaster relief in the region. Other reasons for humanitarian-related aid include extreme poverty, hunger and the effort to improve global health by fighting preventable, communicable diseases that are common in the developing world.

Infrastructural development is a commonly cited purpose for aid dollars. China, for example, has been investing heavily on infrastructure in Africa, including a $15 million aid deal with Sierra Leone for fiber optics installations. This investment is only one example of how aid is used to build communications, transportation, medical and other critical infrastructure in order to help facilitate economic growth and development.

Aid earmarked for education assists countries while preparing them to be more independent. Aid programs often focus primarily on improving access to education, which can be a limiting factor for education’s effectiveness. These programs also target teachers’ training in order to improve the quality and impact of the education being provided. Building human capital by establishing skills such as basic literacy cannot be underestimated.

In the past eight years, the European Union Commission has invested well over four billion euros in improving education and literacy in multiple developing countries. They were able to put at least nine million children into schools and train hundreds of thousands of teachers in order to improve standards of education. Rudimentary reading and writing skills that are taken for granted in developed countries can change the lives of those in developing countries where literacy rates are low. Literacy can be thought of as a gateway toward further human capital and economic development.

Foreign aid can also be motivated by strategic and geopolitical forces. Helping other countries can leverage support for the gifting nation or help build strong relationships in a certain region.

Israel received the most foreign aid from the U.S. in its 2012 fiscal year. Though Israel does not face the same low literacy rates or high levels of poverty as countries in Africa, there are strong geopolitical motivations that have led to this phenomenon. In addition, five of the top ten recipients of aid in the same year were from the Middle East. Some states in the region are rife with war and turmoil. As a result, the U.S. provides foreign aid to help these states recover from the damages of war or to aid in creating and sustaining stability across the region as a whole.

Developed countries are in a position to help those in foreign countries who are in need of assistance. Foreign aid is an essential and fairly pain-free way for developed countries to fight against global poverty and support global health, education and peace.