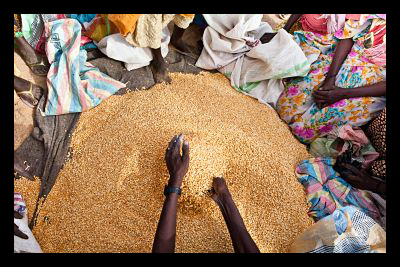 Nearly 54 percent of Yemen’s population remains below the country’s poverty line. The rate of unemployment among young people in Yemen has grown to be around 60 percent of the population.

“Preliminary studies show that between March 2011 and March 2013, Yemen’s economy saw a loss of about $4.75 billion as a result of oil pipeline bombings and acts of sabotage targeting some installations,” said Yemeni Minster of Oil and Minerals, Ahmed Abdullah Daris.

Recently, the United Nations food agency has stated that they are scaling up their food aid to Yemen as nearly half of the population is going hungry. More than 10 million of Yemen’s 25 million inhabitants either require food aid due to an inability to find enough food for themselves, or are teetering on the edge.

In 1996, the World Health Organization defined food security as “when all people at all times have access to sufficient, safe, nutritious food to maintain a healthy and active life.”

Food security is built on three pillars: (1) food availability, or the opportunity to have sufficient quantities of food available on a consistent basis; (2) food access, having sufficient resources to obtain appropriate foods for a nutritious diet; (3) and food use, appropriate use based on knowledge of basic nutrition and care, as well as adequate water and sanitation.

“The country has one of the world’s highest levels of malnutrition among children,” said World Food Programme spokeswoman Elisabeth Byrs, “with nearly half of all kids under the age of 5—a full 2 million of them—stunted. A million of those kids are acutely malnourished.”

The problem is difficult to tackle. Yemen, one of the poorest countries in the world, has been going through a difficult political transition since the removal of president Ali Abdullah Saleh after a year of deadly protests against his 33-year rule.

At the same time, Yemen is also vulnerable to international hikes in food prices, since it imports around 90 percent of its main staple foods like wheat and sugar. The price hikes, according to the U.N., affect around 90 percent of Yemeni households and may be the reason why nearly 50 percent of children under the age of 5 suffer from chronic malnutrition.

Starting in July, the U.N. agency plans to launch a special two-year “Recovery Operation” aimed at addressing long-term hunger in the region. The Recovery Operation will help to ensure food stability for around 6 million people. Under the program, the U.N. will provide malnutrition prevention and treatment, give 200,000 girls in school take-home rations and will help create rural jobs, improve farms and water supplies.

The program aims to safeguard Yemeni lives and boost food security and nutrition in poverty-stricken areas. The program seeks to reach 6 million Yemeni people from mid-2014 to mid-2016, and will aim to provide solutions for long-term relief instead of short term. The U.N. has announced that their efforts would only offer temporary relief.

The U.N. warns, however, that the aid increase will be costly, with the agency estimating that the two-year program will cost around $491 million.

What is Poverty?High Childcare Costs in Ireland Cripple Economy
Scroll to top