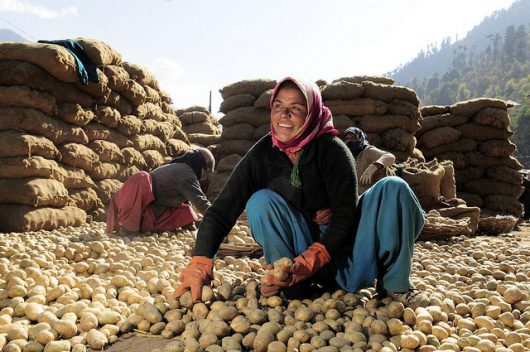 The IFAD is an international financial institution created to provide assistance during global droughts and famine. Since 1978, IFAD has contributed more than $10 billion in grants and low-interest loans that have aided more than 300 million people living in poverty. The loans and grants are used to increase household incomes and provide essential needs for families. The IFAD is primarily a U.N. agency in partnership with Organization for Economic Co-operation and Development, Organization of the Petroleum Exporting Countries and various developing countries. Currently, the IFAD supports more than 200 programs and collaborative projects in 81 developing countries.

According to the U.N. High Commissioner for Refugees, the total number of refugees, asylum-seekers and internally displaced people has reached 65 million globally. In the Near East and North Africa region, 10 percent of agricultural communities consist of men and women who have been displaced and were forced to relocate. Most displaced individuals originated from rural areas and are currently living in host communities outside their native country. Global financial and medical assistance has vastly increased due to recent years of extreme violence and other violations of human rights.

At the U.N. World Summit on Migration, held in September 2016, the IFAD announced the creation of FARMS to counter the escalating and ongoing displacement crisis. Khalifa Bouzar, director of the NENA division, controls FARMS. She confirmed that FARMS will cover “both international refugees (people displaced across borders) and internally displaced people (forced to flee their homes due to conflict or other extraneous factors but remaining within their country).”

Specifically, Bouzar will focus on host areas and support local communities as they adjust to the influx of displaced men and women. The FARMS mission is to promote agricultural sustainability and increase crop production. As a result, the program will provide displaced individuals with financial grants to help them contribute back to their host communities.

Another portion of FARMS mission focuses on the creation of “One Million Days of Work,” which will generate a minimum of 20,000 job opportunities for local youth. This will be achieved by implementing 500 community infrastructure projects, strengthening community and regional governments’ ability to manage agricultural and economic development. Once initial development is stabilized, FARMS aims to improve the management of natural resources, primarily land and water.

Ultimately, the FARMS mission is to assist in the implementation of long-term peace and development of dividends. “It is paramount,” Bouzar states, “to create a healthy climate for economic opportunities, and enable displaced people to return to their communities.” The program has secured $20 million of its $100 million goal.