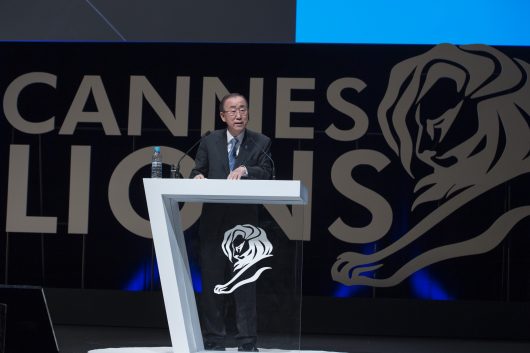 The Common Ground Initiative was unveiled at the Cannes Lions advertising festival on Friday, June 24 to a crowd of some of the industry’s top leaders. U.N. Secretary General Ban Ki-Moon shared the stage with some of advertising’s most powerful CEOs to make the announcement.

The initiative is a plan to produce and distribute advertising about the Sustainable Development Goals (SDGs), the United Nation’s set of 17 goals for improving living conditions around the world. The ads will run in publications such as The Economist, The Wall Street Journal, the Daily Mail and Le Figaro, to name a few.

The collaborative effort between the rival companies is unprecedented, even more so when considering that both the ads and media time were gifted pro-bono for the cause.

However, considering the importance of the SDG’s, the necessity of raising awareness in participating countries cannot be understated. It is especially vital considering that there are no legal mandates pushing countries towards adopting the SDGs.

The Wall Street Journal interviewed Jan Eliasson, the deputy secretary-general of the U.N. In his interview, Eliasson argued that raising awareness of the goals would add pressure on governments to take a stand on some of the issues in question.

A 2013 survey by the European Commission found that only six percent of the European Union was aware of the U.N.’s previous initiative, the Millennium Development Goals, despite their success. The U.N. hopes that Common Ground will inspire more countries to reach the 2030 date for the current goals.

According to the Jamestown Sun, the first set of advertisements will focus on everyday people agreeing that the goals of the SDG’s are more important any rivalries between interested parties, implying that everybody should be a strong supporter of the U.N.’s goals.

In debuting the initiative, the advertising companies issued the following statement: “By working in partnership to support the Sustainable Development Goals, we want to demonstrate that even fierce competitors can set aside their differences in order to serve a wider common interest.”

International Development Association: Working in Myanmar 5 Things to Know About Poverty in Tajikistan
Scroll to top