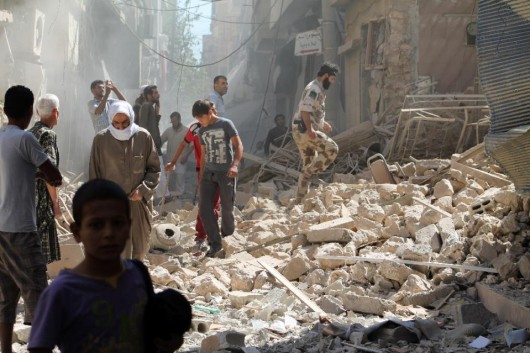 Just after the U.N. Under-Secretary-General for Humanitarian Affairs and Emergency Relief, Stephen O’Brien, told the U.N. Security Council that an airdrop would be carrying immediate humanitarian aid to the city of Deir Ezzor in Syria, the World Food Programme (WFP) announced that the airdrop landed unsuccessfully.

The Justice for Life Observatory in Deir Ezzor said that “the cargo was significantly damaged” and that most of the containers fell into remote areas.

The U.N. estimates that more than 480,000 Syrians live in besieged areas, with four million people in areas difficult to reach. “The U.N. is calling on all sides to lift starvation sieges across Syria, where it estimates that 487,000 people live, although some non-governmental organizations say the figure is much higher,” writes AFP.

Additionally, the U.N. confirmed that there are approximately 200,000 Syrians living in Deir Ezzor. A recent U.N. report showed that those in besieged areas suffer from harsh and worsening conditions and that many have died from starvation, according to the BBC.

The WFP had previously ruled out airdrops as a method of delivering aid to Syria due to the difficulties involved in securing flyover rights, locating viable drop zones and arranging distribution on the ground, reports the BBC.

The British government, likewise, has called air drops “high risk” and says that they should only be used as a last resort.

“The operation faced technical difficulties and we are debriefing crew and partners in Deir Ezzor to make necessary adjustments,” the WFP told IRIN. “The team will try again when possible…high altitude drops are extremely challenging to carry out and take more than one trial to develop full accuracy,” commented the WFP spokesperson.

Moreover, the Local Coordination Committees activist network reported that the Syrian army might have seized part of the aid.

Specialists are still skeptical of continuing with airdrops, specifically because, as claimed by IRIN, “between 480,000 and two million Syrians are living under siege (the numbers differ depending on who is counting), and until recent talks led by the US and Russia, aimed at a partial ceasefire and better humanitarian access, aid organizations had effectively ruled them out because aid drops, even at low altitude, are notoriously difficult to carry out.”

Whether or not the operation continues is yet to be seen but reports have confirmed that there are still difficulties with immediate humanitarian aid reaching besieged areas.