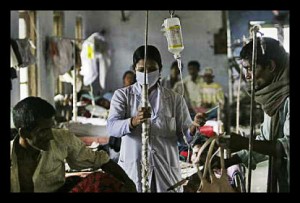 Tuberculosis may be the world’s most romanticized disease. La Boheme’s Mimi, Les Miserables’ Fantine, Moulin Rouge’s Satine, among many others, have succumbed to the disease. Despite being a recurring theme in literature and art, the reality of tuberculosis is much uglier.

Tuberculosis, or TB for short, is second only to HIV/AIDS as the leading cause of death from a single infection. It’s symptoms including coughing up sputum or blood, fever, night sweats, weakness and chest pain.

An infection of the lungs, TB is quite insidious. Highly contagious, it can be spread simply by inhaling a few particles from an infected person coughing, spitting or sneezing. It can lie dormant in many individuals, meaning that although they are carriers, they don’t develop the active disease, nor do they transmit it.

However, once infected with the active form of the disease, the symptoms are often mild and so individuals do not immediately seek treatment and often contribute to spreading the infection. People infected with HIV or diabetes are much more likely to get TB because of weakened immune systems. Environmental risk factors including overcrowding and malnutrition make TB a disease of the poor.

TB occurs in almost every country in the world, though mostly in Asia and Sub-Saharan Africa. Both treatable and curable, control of the disease is mainly preventative, done through vaccination. Once contracted, antibiotics can be administered to help those infected, though treatment is often difficult because of the resistant nature of the bacteria.

The Listening ProjectThe History of UNICEF
Scroll to top