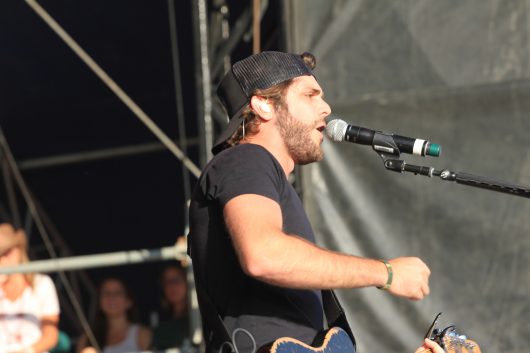 Thomas Rhett emerged in 2016 as one of country music’s notable rising stars. This year he released his sophomore studio album Tangled Up, which spawned multiple hits including “T-Shirt,” “Star of the Show” and CMA song of the year, “Die a Happy Man.”

On Twitter, Rhett often calls attention to 147 Million Orphans, an organization sponsoring trips to Africa and Latin America with a purpose of building up local communities. Beginning in 2009, the organization’s original mission was to provide food, water, medicine and shelter to children in Uganda.

However, it has since expanded to Haiti and Honduras with remarkable achievements such as funding the construction of a large-scale medical center in Gressier, Haiti. According to its website, the organization accomplishes its goals by focusing on sustainable income projects that encourage healthier technologies and family preservation.

As a longtime supporter of the organization, Rhett announced a charity concert held on the evening of October 4, 2016. Tickets were limited and hopeful attendees raised money by bidding for the chance to take part in the event. Before the concert, guests participated in a silent auction to bid on exclusive items such as autographed guitars and appropriately customized t-shirts. Guests then arrived at The Old School in Nashville for dinner and drinks, a private concert, a personal meet and greet and an after-party bonfire.

Drawing additional publicity, Rhett’s performance was accompanied by fellow musicians: Dierks Bentley, Tyler Hubbard and Brian Kelley of Florida Georgia Line, Walker Hayes, Shane McAnally and Russell Dickerson. With all proceeds benefiting his charity, the concert all in all raised over $250,000.

Further, Rhett’s wife Lauren Atkins is an avid supporter of the organization. Atkins is professionally trained as a nurse, and she frequently embarks on mission trips herself to deliver medical supplies, new mattresses, and bed covers to the aforementioned nations.

Most recently, the couple also celebrated Giving Tuesday in Kenya by raising awareness of a wildlife refuge. Rhett then announced a few dates for his solo “Home Team Tour” beginning in spring 2017. While a follow-up “Thomas Rhett and Friends” concert has not been formalized yet, it is clear that the causes in developing nations will remain an important component of the Atkins’ family philanthropy.