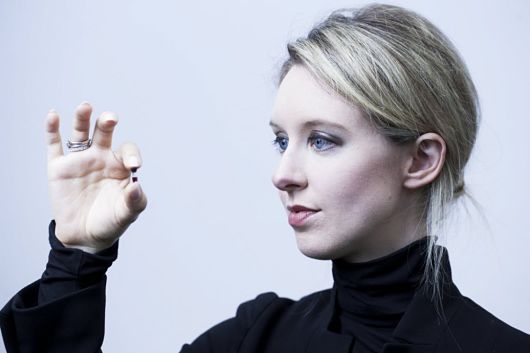 Getting a blood test is never pleasant. But what if I told you there is a new way of getting blood tests that does not involve big needles, just a prick on your finger? Well, that is exactly what Theranos has done.

Theranos is a private health-technology and medical-laboratory services company in Palo Alto California, founded in 2003 by Elizabeth Holmes. Earlier this year, Elizabeth Holmes was inducted into the newest class of Presidential Ambassadors for Global Entrepreneurship. She is the youngest female self-made billionaire.

Holmes and her team have reduced blood tests from many vials of blood to just a few drops. Theranos focused on reducing the blood sample size, making it inexpensive, and transparent about its prices.

Why is so much blood drawn? Holmes explains, “The entire system was designed around that, when clinical lab infrastructure began to develop similar to mainframe computing, where you have large highly centralized systems that require that much blood.”

The company’s goal is to have patients test their blood more often so doctors will be able to see any indicators for a condition, disease or something much earlier than when the physical symptoms appear. According to Holmes, “40-60 percent of Americans do not go get their lab test when their doctor has told them to.”

Holmes also adds that “doctors do not usually order lab tests unless patients report systems for a given condition because, in order for them to have the insurance pay for it, they have to justify it on the lab form with a code that describes a patient’s symptoms. By the time a test is ordered, you are probably at risk.” Holmes seeks to make the process better, to engage people, so that data can be used as a preventative measure as opposed to a reactive measure.

Holmes argues that these small samples are more accurate than the larger ones. Theranos has worked in eliminating the error in variability that is associated with the human processing of samples, which according to Holmes is the cause of 93 percent of the errors in today’s lab industry. Theranos has used advances in technology to automate many of the processes and decentralize and distribute the infrastructure to reduce the errors of human processing.

Some are skeptical about Theranos’ technology and wonder how it is able to offer tests for less with a faster turnaround time than lab giants such as Laboratory Corp. of America and Quest Diagnostics.

Capital Blue Cross Pennsylvania has been very thorough in vetting the Theranos technology. The Senior Vice-President of the company, Aji Abraham, had his blood tested with Theranos and then compared the results to a recent traditional blood test, and no significant differences were discovered.

The Carlos Slim Foundation is using Theranos technology in clinics across Mexico, in an attempt to provide blood tests for cholesterol, kidney proteins and other lab results to 1 million people to fight health problems caused by obesity.

To date, Theranos has raised $92 million in VC funding from investors such as Draper Fisher Jurvetson and Larry Ellison. Its locations include Theranos wellness centers in Walgreens and other locations in Arizona and California with new locations coming soon.