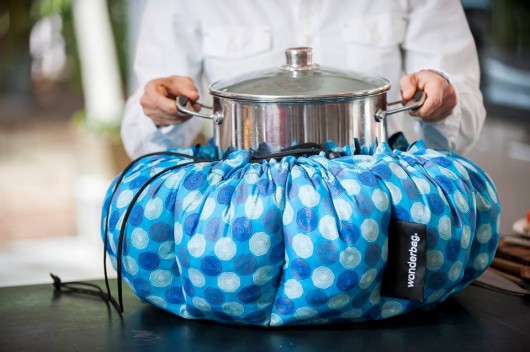 The Wonderbag is a revolutionary non-electric cooker with the capacity to change the way people cook around the world. The Wonderbag website describes the product as “a simple but revolutionary non-electric heat-retention cooker. It continues to cook food that has been brought to the boil by conventional methods for up to 12 hours without the use of additional fuel.”

The Wonderbag works by allowing the person cooking to heat any pot of food and then place the boiling pot into the bag and seal it. The initial heating can be done in any way whatsoever: on a stove in a modern kitchen, over a campfire or on a charcoal fire in a developing country’s village. The heat from the initial boiling keeps the food cooking inside the Wonderbag for eight to 12 hours.

The Wonderbag is portable and can be used anywhere. In addition to heating food, it can also be used as a cooler. All you have to do is freeze it and it will keep food cold for hours.

In an interview with the Huffington Post, inventor Sarah Collins said “The biggest killer in the world is indoor air pollution related diseases; over 4 million people die annually from cooking related fire diseases,” half of whom are under five years of age. Also, the burning of fuels causes hundreds of thousands of burns every year, according to the Wonderbag website.

Deforestation is a major problem around the world and is happening especially quickly in the developing world where they still use wood and charcoal as fuel and for the purposes of cooking. And by 2025, water shortages may affect up to two-thirds of the world’s population. In an interview with Climate Action, inventor Sarah Collins stated that: “The bag can reduce the amount of fossil fuels that people use for cooking by 90 percent.”

According to the Wonderbag website, the preparation of food can have a particularly damaging effect on the progress of women in developing countries. Preparing food can take hours, including the time spent gathering fuel. The use of the Wonderbag can free up several hours a day, allowing girls time to go to school and women time to do other work.

Finally, for each Wonderbag purchased by someone in the developed world, one will be donated to a family in the developing world, linking people all around the world to each other.