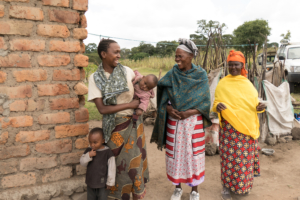 Tanzania is the largest and most populous country in East Africa, with nearly 59 million inhabitants. It is a youthful and rapidly growing population with a fertility rate of nearly 4.8 children per woman. Almost two-thirds of the population is under 25, and 42% is under 15. While malaria is the leading cause of death for children under 5, HIV/AIDS is the main killer among adults. In 2018, 1.6 million people were living with HIV in Tanzania, with a prevalence rate of 4.6% among adults. Approximately 24,000 adults died of AIDS-related illnesses, the seventh-most in the world. As more of the country’s population reaches adulthood, containing the spread of HIV in Tanzania will become even more important, and international assistance can continue playing an important role in the effort to do so.

Although it is too early to predict whether Tanzania will achieve these targets, the Joint United Nations Programme on HIV/AIDS reports the country has made strides in fighting the disease. In addition, the number of AIDS-related deaths per year declined to 49% between 2010 and 2018. Moreover, according to a 2019 report based on a 2016-2017 survey, Tanzania appeared close to reaching at least two of the three 90-90-90 benchmarks: 60.6% of people knew their status as living with HIV; around 93.6% of people diagnosed with HIV were receiving antiretroviral therapy; 87% had viral suppression of the people receiving treatment.

Action Taken by the United States

The President’s Emergency Plan for AIDS Relief (PEPFAR) is the United States’ response to the epidemic and is a leader in the fight against HIV/AIDS. The initiative provides antiretroviral treatment to more than 14.6 million people in more than 50 countries. As a result, this reflects remarkable progress since the program began in 2003 when only 50,000 people were on treatment in sub-Saharan Africa. Furthermore, the United States’ program uses granular data to map the HIV epidemic and maximize the impact of its efforts. For example, in 2014 the U.S. announced the Accelerating Children on HIV/AIDS Treatment (ACT) Initiative. Around 84,745 people in Tanzania who are 20 years or younger were receiving ART. The ACT initiative has given ART treatment to over a million children and adolescents in total.

Girls are roughly 75% more likely to become HIV infected than boys. In addition, PEPFAR has created DREAMS (Determined, Resilient, Empowered, AIDS-free, Mentored, and Safe). In an overview between 2016 and 2019, PEPFAR DREAMS in Tanzania was given over 52 million dollars in funding. Private sector partners include the Bill and Melinda Gates Foundation and Johnson and Johnson. As with all PEPFAR countries, the U.S. collaborates with Tanzania’s government in the fight against HIV/AIDS. The United Republic of Tanzania’s Ministry of Health, Community Development, Gender, Elderly and Children started the National Aids Control Programme (NACP).

Tanzania took strides to reach the 90-90-90 target. One of these is the Treat All strategy, where they attempt to test and treat as many people as possible. Another effort includes distributing condoms to public and private places consistently to prevent the spread of infection. They also hope to educate males to raise awareness about their vital role in spreading the virus. Finally, they hope to address sub-groups at higher risk, such as those who inject drugs. These efforts, among many others, have helped reach the hopeful numbers listed above and have given Tanzania great potential for progress towards 2030.

The NACP is proud of its efforts to eradicate HIV in Tanzania. Looking forward, UNAIDS has created a new target: 95-95-95 by 2030. Tanzania is making progress and has a bright future.