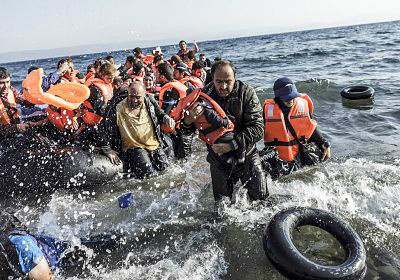 In the wake of the Syrian refugee crisis, a new form of relief organization has emerged, known as Ad Hoc Grassroots Organizations (AHGOs). In a study that explores their role in Lesvos, Greece, the Public Library of Science (PLOS) identified 41 AHGOs and interviewed 13 of them.

AHGOs are helpful at providing quick humanitarian relief. They are particularly potent when governments are not able to respond as quickly to disasters. According to the report done by PLOS, in the future, AHGOs should be recognized as new humanitarian actors.

These groups are created specifically to provide relief for a particular cause. AHGOs previously provided relief during the earthquake in Haiti in 2010 and Hurricane Sandy in 2012. In this instance, the 13 that were contacted were formed in 2015 with the intent of assisting refugees that fled the crisis in Syria, made their way over the Mediterranean, and landed in Lesvos.

PLOS explores this notion in its article. Because of their lack of infrastructure, AHGOs provide ordinary people who want to help by responding to disasters. Many volunteers working in Lesvos were there because they expressed a simple desire to help and were surprised that more aid had not already been sent by the United Nations and international non-governmental organizations (INGOs).

Volunteers working with AHGOs in Lesvos expressed that their lack of structure could also be negative. The volunteers tended to take the form of paramedics, nurses, and those experienced in the wilderness. Despite the skills that the volunteers brought with them, many were ill-prepared for refugee care.

However, on the positive side, AHGOs have the ability to reach surge capacity quickly. Surge capacity, in a humanitarian context, is defined as “the ability of an organization to rapidly and effectively increase its available resources in a specific geographic location.” The Humanitarian Practice Network defines surge capacity as the ability to “scale operations [people, money, and materials] up swiftly, smoothly and productively.”

Reports on standard INGOs express their inability to reach surge capacity. Therefore, the AHGO’s ability to reach surge capacity is favorable. It further demonstrates the speedy effectiveness of grassroots movements. Humanitarian aid can benefit from the buffed and nuanced structure of longstanding INGOs as well as the small-scale potency of AHGOs.