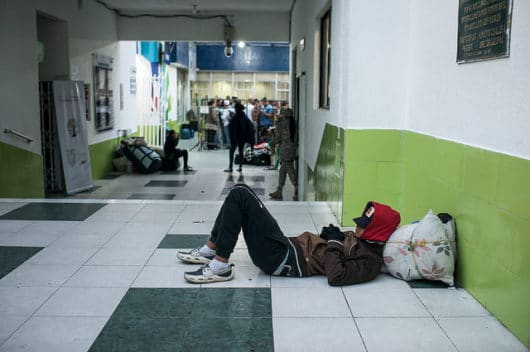 What began as an economic recession in Venezuela has quickly escalated into a humanitarian crisis where one must fight to survive. Venezuela is steadily becoming the most violent country in the world. At least 28,479 deaths of a violent nature occurred in 2016, and the nation currently holds a homicide rate of 91.8 for every 100,000 people. The hunger crisis and the fact that 82 percent of its population is living in poverty could be linked with the growing rate of crime and violence in Venezuela.

Conditions Leading Up to the Violence

In 2014, Venezuela was struck by an economic recession caused by the decline in oil prices – Venezuela’s primary export. Its biggest shortfall came with the collapse of Venezuela’s currency when the price of imported goods swelled and the country was forced to limit the number of goods brought in. Staples like toilet paper or rice were often impossible to find, and when one did locate them, such essential products were often too expensive to buy. A shortage in even basic medicines and medical supplies began causing serious concerns.

The Borgen Project was fortunate enough to interview Venezuelan national and Ph.D. student, Maria Alemán. She described the scene, “Picture a supermarket or a grocery store when there is a snow storm in one of the southern states. You go in and everything is empty. There is nothing. That’s how it is there 24/7.” This lack of imported goods has created panic and a hunger crisis in Venezuela. With the widespread panic, Venezuela was faced with having to put strict regulations on many goods available for purchase. “If you get to the store and they are regulating an item, let’s say you want to buy two gallons of milk because you have a big family. Well no, if they are only allowing you to buy a gallon, then that is all you get,” Maria explains.

Lack of Jobs and Resources is Creating Chaos

The collapse of Venezuela’s economy affected the job market. Many businesses’ closed or took their business out of the country, leaving families to struggle with the cost of rising food prices with no source of income or not nearly enough income. “People are starving because the price of food is too expensive, even with a monthly salary,” Maria defends. As conditions grew dire and many were met with the challenge of feeding themselves and their families, crime in Venezuela rose at an epidemic rate. The Venezuelan Observatory on Violence (VOV) reported a 14 percent increase in violent crimes from 2012 to 2013. In 2015, 17,778 people were murdered in Venezuela; however, the VOV revealed that those numbers were as high as 27,875.

Maria recalls a shift in the nature of the crimes as desperation fueled robberies with the threat of violence. “Thieves started to go find knives and guns because there was no other way people were going to go and give them their stuff. People got so upset that they had no choice but to start killing people to actually feel threatened. It’s even worse now because people are having to kill to survive.” With no other resources available, the population turned to violence, either in an effort to attain resources or to protect oneself from others trying to take resources.

If things couldn’t seem any worse, the increase in crime and violence running rampant in the streets of Venezuela was a catalyst for the formation of several crime organizations who have taken to exploiting the hunger of young people to get them to participate in criminal activities, which is only adding to the rising crime rate.

Efforts to Decrease Crime and Violence in Venezuela

While Venezuela has implemented a subsidized food program that benefits 87 percent of Venezuelans, it hasn’t done much to slow the hunger-induced crime sprees. Maria says, “people receive boxes from the government with some food products like rice, flour, etc., but not everyone gets the same products in their boxes. The contents of a single box aren’t enough for a family of four.” Clearly, the government needs to find other solutions than providing a small amount of food per family.

Other attempts to alleviate the situation were raising the minimum wage to 34 times the previous amount and minting a new currency (the “sovereign bolivar”) to replace the “strong bolivar.” Unfortunately, new currency or no, businesses cannot afford to pay the new minimum wage set by the government and are laying off employees or, in the worst case scenario, closing down. There have been attempts by the Union of South American Nations (UNASUR) to act as a mediator between the people and the government amidst the protesting, but no demands have been met. Although the situation is bleak, the hopes for successful negotiation may be the only way to end the crisis in Venezuela.

Although crime and violence in Venezuela have been commonplace in the past, current living conditions in Venezuela have escalated the crime to new heights, creating a harsh reality many are facing in order to survive. Without the basic means of survival such as a livable wage, job security and even access to basic resources, Venezuela will continue to see a steadily climbing crime and murder rate.