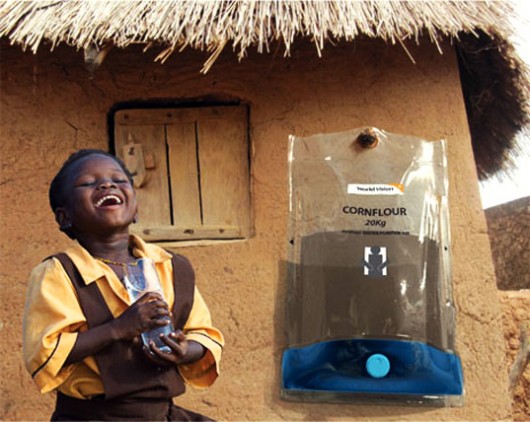 Approximately 63 million people do not have access to clean water, according to the World Health Organization (WHO). To address this problem, industrial designers Jung Uk Park, Myeong Hoon Lee and Dae You Lee came up with the Life Sack.

Fashioned as a backpack, the Life Sack also ensures ease of mobility, which is especially crucial for areas without sources of water. These areas rely on individuals to travel outside of the community to supply the water that they need.

Water purification is not the only way that the Life Sack can be used.

The designers were partly inspired by how nongovernmental organizations and other charities often sent their supplies, such as grain and other food staples, in sacks. The Life Sack can thus double as a storage unit, allowing users to easily store and transfer goods other than water when needed. According to CauseTech, some nongovernmental organizations now use the Life Sack rather than “conventional food bags” to send their goods.

Further improvements are still to be made. Of the 63 million without access to clean water, most are concentrated in Sub-Saharan Africa and Southern and Southeast Asia.

Goal six of the United Nations’ 2015 Sustainable Development Goals (SDGs) addresses the need to “ensure access to water and sanitation for all” by 2030. Innovations like the Life Sack may support this effort toward increasing global access to improved water sources.