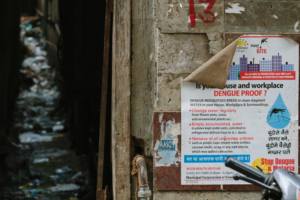 According to the World Health Organization, dengue fever is one of the ten major global health threats of 2019. The mosquito-borne illness results in flu-like symptoms that can kill up to 20 percent of those infected. Approximately 390 million cases of dengue fever are reported each year across 100 different countries, although, many cases go unreported. Cases of dengue fever have also increased 30 times in the last 50 years, meaning that today, 40 percent of the world’s population is at risk of contracting the disease.

While dengue fever used to be concentrated in countries with extreme tropical climates, such as India and Bangladesh, the disease is now prevalent in countries that have more temperate climates, such as Nepal. With higher than average temperatures, rainy seasons are lasting longer which creates the perfect environment for the Aedes mosquito, the carrier of the disease. Unfortunately, the geographic regions that the Aedes mosquito inhabits coincide with low and middle-income countries. Many of these countries do not have sufficient health care systems to cope with this major health issue. Therefore, the effects of dengue are even more severe.

The World Health Organization is leading efforts to reverse the increasing threat of dengue fever. One common tactic used is immunization. The first immunization for dengue fever was approved in 20 countries in 2015. However, follow-up data from 2017 showed that the vaccine was actually harmful to those who had never contracted the disease, putting people at a higher risk of more severe cases of dengue. Now, the vaccination is recommended as a measure for those who have already been affected.

In addition to immunization, people can inhibit the Aedes mosquito’s survival and procreation by properly disposing of human waste, and not leaving out any stagnate, uncovered containers of water, as mosquitoes thrive and lay eggs in both environments. It is also advised to use spray insecticide to repel bugs and invest in screened windows and sleeping nets for protection in homes.

The World Health Organization is partnering with local organizations and governments in affected countries to ensure that the number of deaths caused by dengue fever will decrease by 50 percent in 2020. In order to reach this goal, however, additional funding and research are needed so that the scope of dengue fever is properly understood. Health care providers also need the training and resources to properly address the issue and detect the disease in its early stages as well. If dengue fever is diagnosed before the symptoms become too severe, mortality rates of the disease become much more optimistic.

Artists Against Poverty10 Facts About the Sudan Genocide
Scroll to top