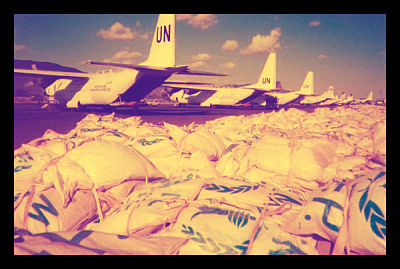 During international crises, the media often publishes striking images of planes unloading bags and bags of food to distribute to those in need, or air-dropping supplies. Often, these are from the World Food Programme, a branch of the United Nations that focuses entirely on providing food and easing malnutrition in at-risk and needy communities worldwide.

Formed in 1963, the WFP was initially started as a three-year experiment after the director of the U.S. Food for Peace Program spoke of the need for a larger, multilateral food assistance organization. Its success was such that after two years, it was expanded into the branch it is today. In 1994, it adopted a mission statement, a first for any U.N. organization, which established its focus as the following:

The WFP’s programs are not limited to the direct distribution of food. It has expanded to provide food vouchers, implement food for work programs for the poorest members of society, buying food directly from developing countries to support local farmers, and providing food specifically to sufferers of HIV and TB (for whom proper nutrition is especially important.)

Like UNICEF, WFP has attracted significant attention, also in the celebrity sphere. Actress Drew Barrymore, an ambassador for the program, donated $1 million towards its efforts. Football stars Ronaldinho and Kaka, alongside names like Penelope Cruz, Rachel Weisz, and Sean Connery have also supported the WFP’s efforts.

The WFP’s impact is indisputable: in 2011, it provided close to 4 million tons of food to nearly 99 million people, alongside their other growing programs. They have one of the best track records for aid agencies in terms of cost-effectiveness, with their administration costs reported to be only around 7%. And they are funded entirely by donors and governments who provided an impressive 3.73 billion dollars in 2011.