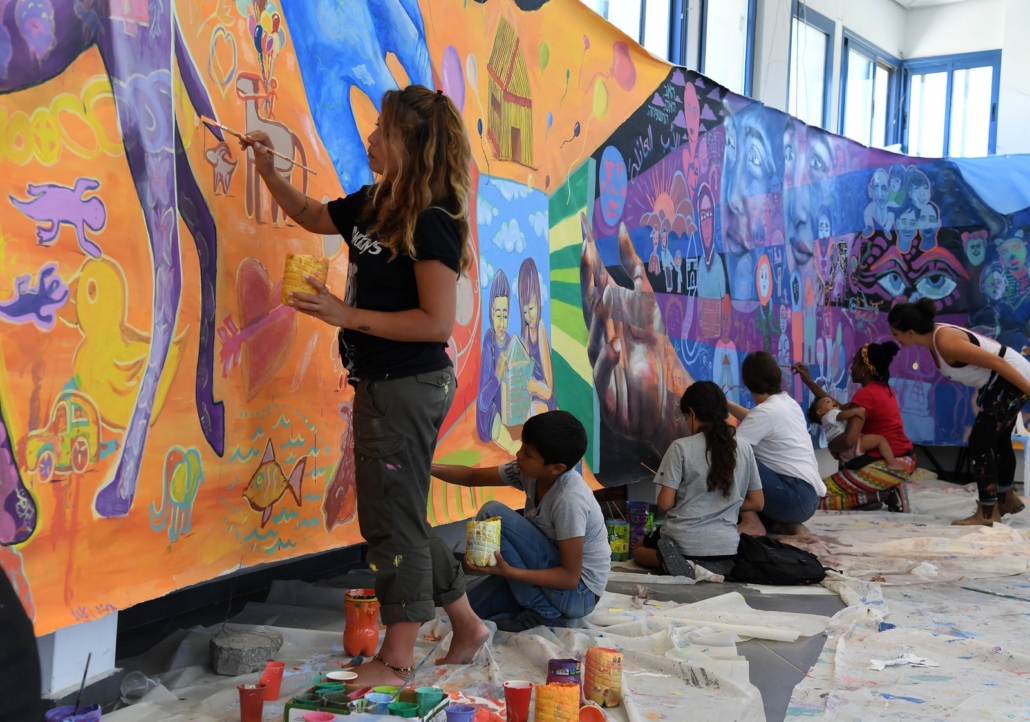 While charities and humanitarian organizations ensure that children refugees receive food, blankets, shelter, vaccinations and malnutrition screenings, it is easy to overlook the other side of war and displacement – the psychological impact – and the healing power of art.

There are 25.9 million refugees around the world and over half of them are children under 18. Children refugees are more at risk of trauma and psychological disorders, such as post-traumatic stress disorder (PTSD), with rates ranging between 50 and 90 percent compared to 10 and 40 percent in adults. Even major depression rates are higher among children refugees than adults.

According to UNICEF, 2.5 million Syrian children are living as refugees in Egypt, Iraq, Jordan, Lebanon and Turkey. In Jordan, nearly 100,000 out of the 1.4 million Syrian refugees reside in Za’atari, a refugee camp. Syrians refugees have no legal right to work in Jordan and tensions are mounting between the two populations. Humanitarian organizations are struggling to provide food, shelter and medical care, so people often overlook educational and creative activities for children.

Artolution and the Need for Art and Expression

According to Joel Bergner, co-founder of the public art organization, Artolution, “The kids, most of whom went to school in Syria, now roam the refugee camp with few rules or structured activities. They are very rough and frequently get into fights. Yet, at the same time, they are also really sweet and friendly.”

If the international community seeks to rebuild war-torn countries or reintegrate child refugees back into a functional society, then psychological treatment is just as necessary as the physical. The trauma of war will lose whole generations if people underestimate the healing power of art.

Bergner seeks to reverse the trend of trauma, aggression and marginalization by giving children something to do with their time and by recognizing the healing power of art. Advances in neuroimaging have shown that the Broca’s area of the brain, associated with speech and articulation, actually shuts down after an individual experience’s trauma. People call this change speechless terror, which makes expressing, and therefore, managing a trauma significantly harder. However, the sensory areas of the brain that process trauma also play a role in art-making. This allows creating art to become a voice for those unable to express their trauma and reconcile their emotions.

The first use of the term “art therapy” was in 1942, following Adrian Hill’s service in World War I. Hill was a British soldier, author and an official war artist whose work highlighted the healing power of art-making. Since then, art therapy has taken on various forms beyond being a method for a therapist and patient to communicate. It can involve drawing, painting, dance, theatre and song.

According to the American Art Therapy Association, the art-making process helps foster self-awareness, manage behavior and develop social skills while reducing anxiety and increasing self-esteem. The most effective art therapy models, though, are those conducted in groups and that include a discussion. This helps prevent avoidance and emotional numbing often associated with PTSD.

The organization, Artolution, is a collaborative art-making project that connects children to positive role models and their peers, but it is not only that. In Za’atari camp, the Syrian artist, Jasmine Necklace, co-facilitated a community mural alongside Bergner as well as Syrian and Jordanian children. This practice allows for discussions among refugee youth so they can talk openly about their trauma.

Art therapist, Melissa S. Walker, says that she and her colleagues have seen the healing power of art therapy through its ability to overcome the speech-language barrier in veterans, allowing them to work through their traumatic experiences in a way that feels safe.

Art therapy programs such as these have found root across the world, as more organizations acknowledge the healing power of art. UNICEF helped develop a drama program in Slavonski Brod, a town in Eastern Croatia, to help children overcome the psychological effects of the Yugoslav Wars. A counseling project for Sudanese refugees utilized drawing, theatre, writing and storytelling to help children traumatized by civil war. The nonprofit organization, War Child, sponsors art-therapy projects in the Caucasus for children refugees and those damaged by war.

Just as any humanitarian organization seeks to improve the lives of children, art therapy projects help heal the psychological wounds of war. It gives refugees a channel to communicate and a chance to rebuild their communities.