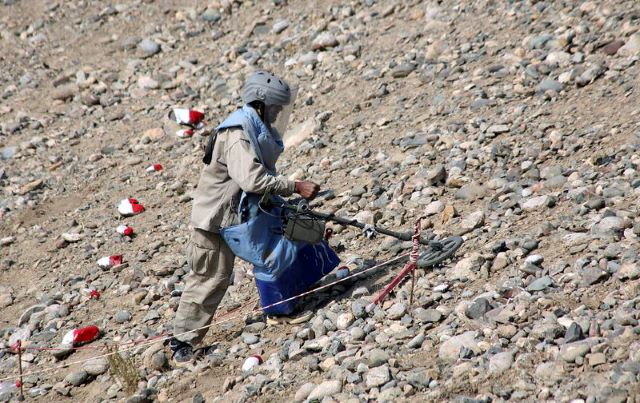 Russian intervention may have ended the latest bouts of fighting in Nagorno-Karabakh on November 10, 2020, but landmines from the region’s post-Soviet independence war, coupled with the recent use of cluster munitions by Azeri forces, make the mountainous region one of the most perilous areas to inhabit in the post-Soviet world. Luckily, de-mining initiatives led by The HALO Trust, a British charity, are steadily working to make everyday life safer.

The Bloody History of Landmines in Nagorno-Karabakh

Nagorno-Karabakh, also known as Artsakh, has been a site of geopolitical contention since the Soviet collapse. When the region seceded from Azerbaijan by referendum in 1988, neighboring Azerbaijan and Armenia engaged in protracted fighting to wrest control of the border. The two former Soviet Republics each lay rival territorial claims to Nagorno-Karabakh. While a majority of its 130,000 inhabitants are ethnically Armenian, Soviet districting placed it within Azerbaijan’s borders for decades, which Azerbaijan has sought to maintain.

Because of prolonged fighting between 1988 and 1994 and intermittent skirmishing since, tens of thousands of landmines in Nagorno-Karabakh remain scattered throughout the region. Estimates from 2005 placed the count at upwards of 50,000. Unexploded ordinance (UXO) and abandoned munitions were also noted. Meanwhile, fighting from October and November of 2020 introduced unexploded rockets and cluster munitions to civilian areas including the capital, Stepanakert, which Azerbaijan repeatedly shelled with artillery.

Together, the explosives riddling Nagorno-Karabakh pose a serious public health risk to its local population. Tens of thousands fled the latest fighting as refugees, but the danger is residual and longstanding. The World Health Organization (WHO) calls landmines “a health threat not to be ignored” and claims that the global burden of disease linked to them is historically underreported. WHO estimates that landmines cause 11 to 12 casualties daily worldwide.

In Nagorno-Karabakh, there are more landmine accidents per capita than anywhere else in the world. When victims of these accidents survive, they are often missing limbs and can take months, or even years, to recover. These dangers force communities to disband as families relocate to safer areas. They also cause food insecurity. Nagorno-Karabakh is mountainous and many of its flat, open areas are unworkable minefields that farmers must avoid.

Because children are less educated or tend to engage in riskier behavior than adults, they make up more than a quarter of all landmine victims in Nagorno-Karabakh.

To address this longstanding public health risk, a British charity, The HALO Trust, has carried out operations targeting landmines in Nagorno-Karabakh. With teams often made up of local volunteers, it has surveyed thousands of acres and organized the removal of nearly 500 minefields since 2000. HALO teams have also supported communities in the wake of border skirmishes between Azerbaijan and Armenia that have left explosives in streets, homes and backyards.

In the latest bouts of fighting, Azerbaijan fired cluster munitions on residential areas in four separate incidents, as reported by Human Rights Watch. Cluster munitions are banned in international humanitarian law because they cannot be directed at a legitimate target, harming civilians and combatants indiscriminately. HALO teams have been responding to local alarms in the wake of these attacks. “In the last five days alone,” HALO reports, “our team has used its expertise and equipment to safely destroy over 150 explosive items.” Teams also delivered relief supplies to sheltering families throughout the fighting, including hygiene kits, blankets and fuel.

In addition to providing relief from landmines in Nagorno-Karabakh, HALO volunteers educate local communities on how to remain safe around landmines and other explosives. Its members frequent schools because of landmines’ disproportionate impact on children.

Conflict, unexploded ordinance and 30-year-old landmines in Nagorno-Karabakh, continually threaten lives in the mountainous region. Thanks to the work of the HALO, however, de-mining projects have worked to mitigate the risk of explosives and serve local communities. The 4,000 landmines and 8,000 items of ordinance removed since 2000 are a testament to the success of de-mining efforts.