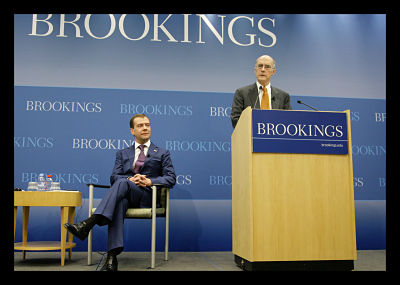 Last Sunday, the Brookings Institute held its 10th annual Blum Conference on global development. This year, the conference emphasized the increasingly significant role of the private sector in lifting the world out of poverty.

Currently, 1.2 billion people still languish in extreme poverty, which is defined as living on less than $1.25 a day. The head of the World Bank, Jim Yong Kim, recently made sweeping promises that by 2030, that number will have dwindled to less than 300 million. And, by all appearances, Kim’s claim has a solid basis: in the past decade, global extreme poverty rates have been cut in half.

The recent Brookings conference in Aspen, Colorado confirms that hope. And, more importantly, it lays out the path to achieve it: by engaging the private sector on a large scale. World leaders like Partners in Health co-founder Paul Farmer, UN Human Rights commissioner Mary Robinson, and former U.S. Secretary of State Condoleezza Rice used their voices on Sunday to reinforce this principle. Major development agencies have already been operating with this idea, including USAID which leveraged over $525 million in private investment last year alone.

The road forward, however, contains many obstacles. Homi Kharas, the author of Brookings’ policy brief, “Reimagining the Role of the Private Sector in Development,” lays out three major hurdles for partnerships between the private sector and the public, academic, and civil sectors.

The first is the massive project of adapting to private funding in development. As part of the process, Kharas recommends that development agencies project “leverage ratios” that link public dollars to private dollars. He applauds the Power Africa Act for using $7 billion in government spending to guarantee $9 billion in private investment pledges.

Secondly, innovation is the key to increasing agricultural productivity and improving access to necessities like water and medicine. Kharas argues that public subsidies for private-led innovation in these areas need to increase to harness the creative power of for-profit businesses.

Finally, Kharas suggests that perhaps the greatest obstacle to engagement is mistrust of private companies by public and civil actors. To build confidence and pave the way for future partnerships, companies need to make their footprints and supply chains more transparent.

“Every high-level development report and project now has private sector involvement,” wrote Kharas. “The time is ripe to systematize this approach and experiment with new forms of partnerships.”