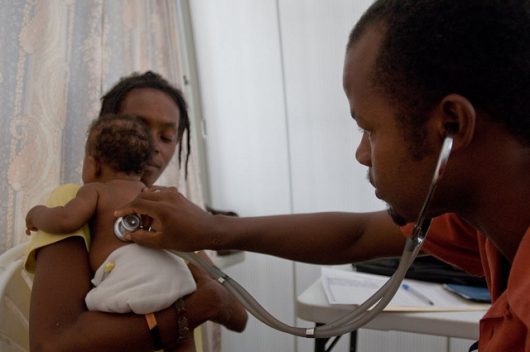 Pneumonia is lung inflammation caused by a viral or bacterial infection. It is one of the leading causes of death worldwide for children under the age of five. The issue is exacerbated by environmental and economic factors. Malnutrition weakens the immune system, especially in young children, and leaves people more susceptible to disease. Poverty and inadequate public infrastructure lead to poor access to medical care, affecting both those who are already sick and those trying not to contract an illness. By nearly every metric, Haiti is the poorest country in the Western Hemisphere, and this is further illustrated by the country’s high rates of pneumonia.

According to a study conducted by Albert Schweitzer Hospital, pneumonia in Haiti is responsible for close to 40 percent of all deaths in children under the age of five. In response to the epidemic of pneumonia in Haiti, the Haitian government has focused on vaccinating more people. However, the country still lags behind the rest of the world in vaccination rates; according to a 2012 study, only 45 percent of children between one and two years old have been satisfactorily vaccinated.

The Benefits of Foreign Aid

The Global Alliance for Vaccines and Immunisation, also known as the GAVI Alliance, has helped the Haitian government in reaching its vaccination goals. In a 2012 press release, the GAVI Alliance announced a nationwide vaccination campaign that would utilize both the pneumococcal and rotavirus vaccines, which would target the primary causes of pneumonia and diarrhea. The organization has also pledged $9.2 million in total support to the people of Haiti. The funding has gone toward immunization, injection safety and medical training.

Other organizations have attempted to address the problem of pneumonia in Haiti. In conjunction with USAID, the Haitian Health Foundation (HHF) runs 60 mobile health clinics that visit villages around Jérémie, a coastal town in southwestern Haiti. USAID also leads a team of health agents, who provide life-saving medical knowledge and doctor referrals so that victims of pneumonia can find the help they need. Within Jérémie, the Haitian Health Foundation runs a 27,000-square-foot outpatient clinic which serves more than 120,000 patients per year.

The Future of the Fight Against Pneumonia

The work of organizations like the GAVI Alliance, the Haitian Health Foundation and the government of Haiti has produced positive results in alleviating pneumonia. In southwest Haiti, child deaths from pneumonia have been cut in half. As a whole, Haiti’s mortality rate for people afflicted by pneumonia has plummeted since the ‘90s, despite the spike in pneumonia cases that occurred between 2004 and 2013. The fight is not over, but important battles are being won against pneumonia in Haiti.