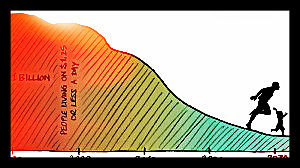 The June 1st issue of The Economist has the compelling title “Towards the End of Poverty.” The feature article on the topic considers the landscape of future poverty reduction. Poverty has been reduced by 50% in the last twenty years but much work remains. There are still 1.1 billion people that live on less than $1.25 a day. What can the last 20 years of success be attributed to? The Economist argues that capitalism and free trade have been integral to poverty reduction.

In the 1990s economic growth soared in developing countries from an average of 4.3% annually to 6% annually. China has been one of the most notable successes, reducing extreme poverty from 84% to 10% while economic growth has continued to accelerate rapidly. As China’s growth slows, it may be difficult for poverty to decline at the same rate as in previous decades. It is also a continuing challenge to raise people above the $1.25 a day line as policies reach for increasingly poverty-stricken communities that are further from the line.

The Economist is very optimistic that the goal of halving poverty again can be achieved. Despite challenges in keeping up the same pace the article argues that the world already knows what to do – it just remains to keep up the good work. They advocate continued trust in marketization and liberalization as the best processes to aid poverty reduction. It is also important to implement policies that reduce inequality and discontinue policies that emphasize inequality. Nothing reduces poverty like free trade.