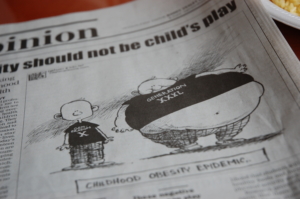 The McDonald’s Big Mac, one of the most famous burgers around the world, has a fair list of tempting qualities. It comes with two pure beef patties, the special Big Mac sauce, lettuce, onions, pickles and melted American cheese, sandwiched between two sesame seed buns. Its taste is well-known and for many, a tempting meal choice. But, perhaps the most tempting quality of the Big Mac is its price. All 550 calories of the Big Mac come to a total of about $5.70 in the U.S. That price is even lower around the world. In fact, the Big Mac can cost as low as $1.86 in South Africa. That stands in stark contrast to the price of more healthy food options. For example, a gallon of organic whole milk costs $6.98 at Walmart, about 22% more than an entire Big Mac. Price differences in healthy versus processed foods lead to a difficult decision for the consumer, especially if they are from a low-income household. The healthy choice becomes hard. Does their economic position sentence them to Big Macs and processed food? It is time to end the cycle of poverty and obesity.

Why is Eating Healthy is Hard?

According to most recent estimates, about 734 million people live on less than $1.90 a day. Additionally, about four out of five Americans will experience poverty or economic hardship at some point in their lives. Hundreds of millions of people are struggling every day to make ends meet and the all too common casualty of their struggle is their health.

According to the Harvard School of Public Health, eating healthy food costs about $1.50 more per day than eating a heavily processed diet. This number may seem small at first glance but adds up to an extra $2,200 per year for a family of four. They must choose between organic or conventional chicken, which can be a price difference of at least 50%. People living in poverty are simply unable to afford healthy food, resulting in a lack of nutrients, a diet lacking in energy-dense foods and even higher obesity rates.

The Link Between Poverty and Fitness

Food and exercise go hand in hand when it comes to overall physical health. Unfortunately, there is also a relationship between poverty and a lack of exercise. Nationwide studies have found that sedentary lifestyles are more prevalent in the poorest counties in the U.S. The correlation between inactivity and poverty is due to a myriad of reasons. For one, finances limit non-essential expenses like gym memberships, sports participation or paying for exercise equipment. Parks and sports facilities are also more regularly in affluent, not poor neighborhoods. One must even take safety into account because poor neighborhoods may have higher crime rates. The possibility of crime discourages parents from allowing their kids to play outside, discourages joggers and forces people to stay inside. Healthy food and sufficient exercise is a luxury. Many cannot afford such an expense to the detriment of their well-being.

Poverty can lead to obesity. Obesity can lead to poverty. The cycle of poverty and obesity together is a dangerous trap that imprisons many. For example, poverty leads to no access to healthy food and exercise, eventually leading to obesity. Obesity leads to further health complications and illnesses which may leave a person saddled with expensive medical bills. Lack of health, in general, leads to lower energy levels and even worsening mental health so that a person is unequipped with the energy and confidence to change their economic standing. Thus, obesity perpetuates poverty. The question is, how can society help break this dangerous cycle? Thankfully, some organizations are coming up with answers.

Unilever is an organization that both identified the problem and produced solutions. Its recognition of the cyclical relationship between obesity and poverty encouraged the organization to release meal plans and brands affordable to all types of incomes around the world. Unilever has dedicated itself to making food that is nutritious and delicious so that making a healthy choice is easy. Unilever’s brands include Knorr, Hellmann’s, Lipton and more. Its options are sustainable and affordable with prices below the market average. Unilever also sells food through discount channels and donates to food banks to expand healthy meals to all populations.

Low-income communities often do not receive the chance to be healthy. The lack of gyms and affordable food traps them in the cycle of poverty and obesity. Thankfully, other food brands, gyms and organizations reaching out to low-income communities have joined Unilever. They are expanding health to all demographics, pointing people away from poverty and towards health.