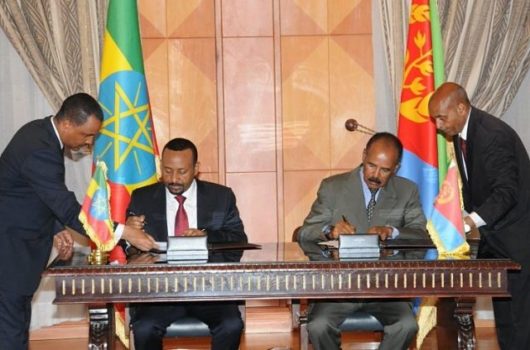 In a historic moment in the year 2018, Eritrea-Ethiopia relations were finally reinstated with the opening of the border between the two former rivals. The landmark occurrence finally signaled an end to the nearly two-decade-long conflict and regional destabilization in the Horn of Africa. It also provides equally strong potential for poverty alleviation as 70 percent of the Eritrean population continues to live under poverty.

To provide historical context, Ethiopia and Eritrea fought a war that resulted in casualties of nearly 80,000 in 1998. Despite the signing of the Algiers Agreement between the two countries in 2000, leaders of the previous administrations refused to reinstate ties till the agreement made between Prime Minister Abiy and President Isaias in July 2018. Ethiopia also began withdrawing its troops from the Eritrean border in December 2018.

Ethiopia continues to condemn Eritrea of backing rebel groups in the Afar region as well as undermines and opposes the government seated in the Eritrea capital of Asmara. Owing to the fact that Ethiopia refused to acknowledge the joint Eritrea-Ethiopia Boundary Commission (EEBC), Eritrea began to stir up support among rebel groups like the Ogaden National Liberation Front.

Eritrea has been accused of gross human rights violations and condemned for its suspension of the constitution and ban on press freedom. Ethiopia, in turn, is accused of similar actions and has tried to suppress protest movements that have echoed across the country in recent times.

However, the new open borders between the two countries could bridge shortages and deficiencies that Eritreans previously faced as they will have access to Ethiopian markets, goods and services. Cross border trade between the two countries may begin to flourish as lorries have already started transporting goods like construction cables and cement to and from Ethiopia. Additionally, Ethiopia will also now have access to Eritrea’s ports which will help maximize the benefits of new sea trade.

The newly forged Eritrea-Ethiopia relations is also a good sign for neighboring towns along the border between the two countries as families and communities plagued by conflict can finally unite and celebrate their shared culture, heritage and language.

The new budding diplomatic relationship also resulted in Eritrea’s reintegration — particularly with the country’s readmission into the Intergovernmental Authority on Development (IGAD). The possibility of joint-development programs between the two countries could boost economic and financial potential along with the collaboration of financial bodies like the International Monetary Fund (IMF). A report by the Guardian in 2018 remarked that the move was akin to “…the fall of the Berlin Wall. Only amplified 1,000 times.”

Moreover, the move may also hint at a possible solution for the Eritrean refugee crisis as refugees can now cross the borders safely to seek a new home. The UNHCR also reported an increase in the number of refugees arriving at the border since its reopening.

Overall, the renewal in Eritrea-Ethiopia relations will maintain regional stability and provide an impetus to resolve similar border conflicts and proxy wars. The noteworthy historic move may help build a strong foundation for further development and prosperity for Eritrea in the long run and hopefully reinstate its reputation and influence on a global scale.