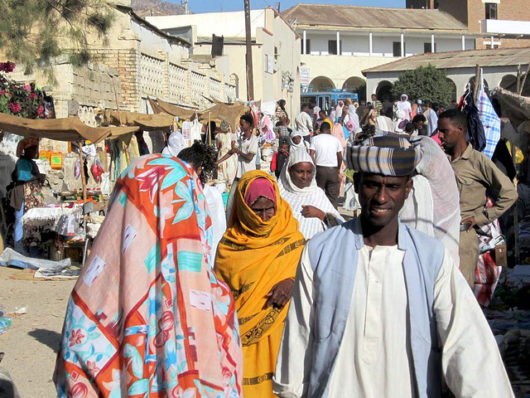 Eritrea is located at the Horn of Africa in the Sahel Desert that is dominated by arid and semi-arid climatic conditions. The country is, therefore, vulnerable to adverse effects of climate variability, recurring droughts and environmental degradation. The World Bank estimates that 69 percent of Eritrea’s population lives below the poverty line. The economy is largely based on subsistence agriculture, with 80 percent of the population depending on farming and pastoralism.

Eritrea has no free press and political repression of the opposition is rampant. After a severe drought in the Horn of Africa in 2015, president of the country, Isaias Afwerki, polemicized that the country had magically evaded the drought, denying a food crisis. A 2016 U.N. report documents that the president rejected U.N. food aid during the 2015 drought.

The proceeding 10 facts about hunger in Eritrea provide a snapshot of the political climate in the country that ousted humanitarian aid agencies over the last decade, while hunger persisted. The facts also highlight advances in sustainable agriculture and projects that have increased food security.

Top 10 Facts About Hunger in Eritrea

Eritrea gained its independence from Ethiopia in 1993. Five years later, the war between the two countries broke out and lasted from May 1998 to June 2000. The conflict saw hundreds of millions of dollars diverted from development aid to arms procurement.

In July 2018, Eritrea signed a historic peace agreement with Ethiopia. Four months following these good measures of social reunification in the Horn of Africa, the United Nations Security Council unanimously lifted international sanctions against Eritrea that have been imposed continuously since 2009. The measures were based on concerns that the Eritrean government was funding and arming the Somali extremist group, Al-Shabaab.

The 10 facts about hunger in Eritrea provide hope that hunger may turn around in the Horn of Africa due to Eritrea’s reconciliation with its neighbors, as the reconciliation could also mean a more open attitude towards humanitarian agencies. There is evidence that suggests that Eritrea could also be a friend in alleviating hunger in the future, across other nations in the Horn of Africa.