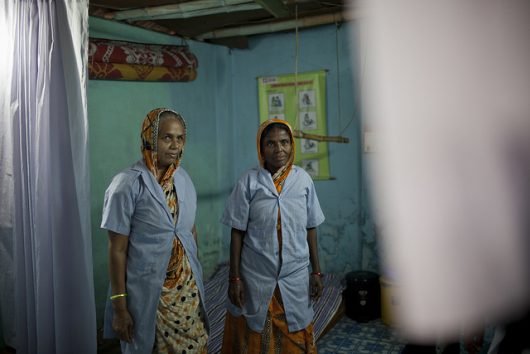 In parts of the world where midwives and doctors are few and far between, traditional birth attendants (TBAs) play a critical though often controversial role in maternal healthcare. Though untrained, they function as medical leaders in their communities, sometimes delivering more babies than midwives. But as health experts reassess the functionality of untrained workers in the modern healthcare model, TBAs are at risk of being banned from assisting with births completely. Some African countries, such as Zambia and Sierra Leone, have already banned TBAs, although not without backlash. These bans have raised a very important and highly disputed question: are TBAs important or detrimental to the reduction of maternal mortality rates throughout the developing world?

TBAs, also known as traditional or community midwives, help pregnant mothers through delivery and the pre- and post-birth periods in areas where viable healthcare facilities are scarce or unreachable. They are typically older women who hold respect in their communities and often have children of their own. Unlike midwives and obstetricians, TBAs lack formal medical training and instead learn about the birthing process through oral tradition and delivery experience.

TBAs today work with mothers and their infants all over the world and are deeply rooted in the birthing cultures of many communities. TBAs are especially in demand in poor rural areas, where as few as 20 percent of births may be serviced by a skilled health worker. Much of their appeal comes from their accessibility, since TBAs offer their services at relatively low costs. TBAs are usually easier to reach than formal health professionals since they work within their communities, whereas bad roads, long distances and lack of transportation can deter women from seeking hospitalization. Women are especially unlikely to attempt the journey to a hospital if the care offered there is inadequate.

Some countries have attempted to make it easier for women to reach hospitals and receive inexpensive or free care, yet many women still seek out TBAs. This can most likely be attributed to the fear that is associated with clinics and hospitals, since many women are wary of facilities outside their communities, especially when surgery is involved. While there can be much trepidation and distrust surrounding doctors and hospitals, TBAs are well established and liked within their communities.

Mbarikit Eno of Nigeria was among the scores of pregnant women who feared hospitals when she was deciding where to deliver. “Two of my friends died in hospital during childbirth and I don’t want to die too,” Eno told the Global Health Next Generation Network in 2016. “Besides, those midwives in the hospital are very harsh; they shout at you and scold you as if you don’t know anything. They never use kind words on the woman despite the pain she experiences during labour. I know the traditional birth attendant that will deliver me. She is from within my community, she has delivered several women and they are all alive.”

Because there are both benefits and drawbacks to TBA-based care, health experts are divided on TBAs’ place in the modern healthcare model. TBA advocates claim that banning TBAs hurts mothers in disadvantaged communities, since TBAs are sometimes the only health workers available in these areas. This negative effect was demonstrated by a 2007 TBA ban in Malawi, which actually caused Malawi’s maternal mortality rate to rise. The country has since reversed the ban.

Experts also propose training and monitoring TBAs to ensure safe birthing practices. Organizations like the World Health Organization (WHO) and United Nations Children’s Fund (UNICEF) have taken steps in this direction by increasing regulations on TBAs in recent years to integrate them into the modern healthcare model. These groups have implemented programs to improve TBA education and forge stronger links between health professionals and TBAs, among other measures.

On the other hand, many researchers argue that TBAs should be eliminated from today’s health system completely. Proponents of the TBA ban claim that TBAs are “untrainable” and too set in their ways to adapt to new healthcare methods. They also warn that TBAs cannot address the main causes of maternal death, such as eclampsia and hemorrhage, and that their often-characteristic illiteracy makes it difficult to keep records.

“It stands to reason that decisions must be made with an eye to the future and not just with a mind for the present,” said former Finnish obstetrician and gynecologist Kelsey A. Harrison in an article for the British Medical Journal. “Traditional birth attendants have no place in this future.”

As modern medicine progresses and new medical technologies enter the mainstream, health experts will need to further re-evaluate the role of more traditional workers in today’s healthcare model. While the best course of action currently remains unclear, banning TBAs and other unskilled workers is only a temporary fix for the low utilization of hospitals and clinics in developing areas. Until the underlying causes that send women to TBAs in the first place are addressed, women around the world will continue to turn to TBAs instead of trained health professionals.