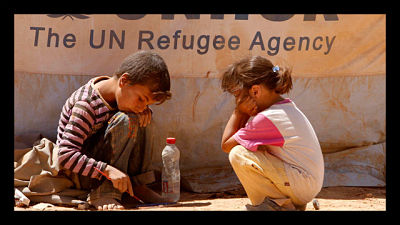 Children, the people who have no voice amidst the conflict in a war-torn Syria, are often impacted harder by the war than anyone else. They are left to the mercies of adults that make decisions for them and their country.

The UN Refugee Agency reports that of 2 million registered refugees, half are children. Many of these children now reside in crowded refugee camps, deprived of the opportunity for advancement, and uncertain of when they will be able to return home.

Unless Syria’s children are helped, the country will never be able to fully recover from the war .

How the Syrian crisis is impacting children:

1.   Perhaps the worst consequence of the Syrian civil war is that it is depriving many children of education. Not only does this hurt children now, it also robs them of a future. They are not being equipped to build professional lives. Without educated children, Syria’s future is uncertain. Children will not be prepared to sustain the country when they reach adulthood. This will lead to indefinite instability in Syria.

For most families, returning to Syria to enroll their children in school is not an option. Save the Children reports that 3,900 Syrian schools have been destroyed since the start of the war. Syria is also still a land of widespread violence and insecurity. This forces Syrian refugees to depend on foreign schooling, if they are to receive any education at all.

Lebanon and Jordan, the countries that have the most Syrian refugees, are struggling to accommodate Syrian children in their schools. Both countries are now home to thousands of Syrian children, and lack the resources necessary to provide quality education for all. It is doubtful if and when many Syrian children will be able to resume their academic work.

2.   Instances of child labor increase as enrollment in schools decreases. UNICEF estimates that there are 30,000 refugee child laborers in Jordan alone.

Although there are laws prohibiting child labor, many refugee children end up working out of necessity. Refugee parents, many unemployed or working menial jobs, struggle to support their families with their own meager income. They feel they have no choice but to make their children work in order to make ends meet. Many of these child laborers hold dangerous construction jobs or work with pesticides on farms.

UNICEF provides cash grants to refugee families who remove their children from child labor and enroll them in schools. However, the grants alone, which do not exceed $45 per month, are not enough to put an end to the child labor problem.

3.   Aside from the economic and educational impact, children are also subjected to the same physical and emotional distress of war as adults. Although millions have taken refuge in foreign countries with their families, many are stuck in Syria. The death toll of the civil war exceeds 100,000. Reuters reports that 7,000 of these deaths have been children.

Even if the Syrian crisis were to end today, the country would have a long road to recovery. Helping the children is a vital first step in any post-war recovery. The well-being of the country will one day rest in the hands of its children. It is imperative that the international community step up and provide more substantial aid to Syria’s children.

Centipede Venom: The New MorphinePatrick and Anna M. Cudahy Fund: What You Should Know
Scroll to top