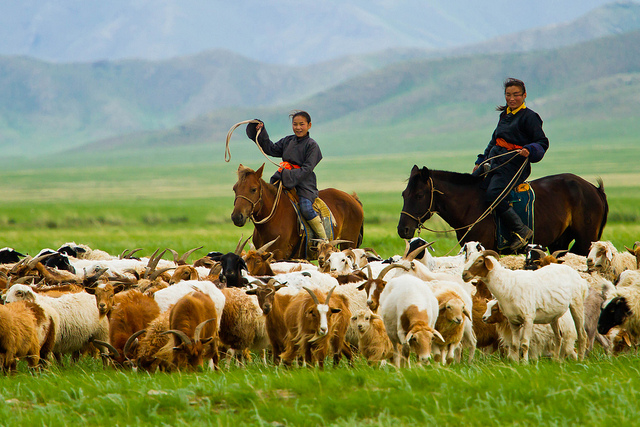 Mongolia sits between Siberia and China and harbors the northern tip of the Gobi desert, desert plains and its legendary steppes. These inhospitable environments do not easily lend themselves to the cultivation of crops. In response to their harsh surroundings, Mongolians developed a society around animal husbandry that has served them well over the millennia. Unfortunately, the introduction of the Soviet system in the early twentieth century, combined with an increase in adverse weather conditions due to climate change, have damaged sustainable agriculture in Mongolia. Today, the Mongolian government, in conjunction with other nations and international aid organizations, is fighting to make Mongolia self-sustaining agriculturally.

The European Commission on International Cooperation and Development sees these small-scale gardening projects in and around cities as an excellent way to help Mongolians improve their food security. Because much of Mongolia’s fruits and vegetables are imported, the urban poor of Mongolia’s cities have less access to these foods. To increase sustainable agriculture in Mongolia and access to food, the EC helped to construct glass and plastic greenhouses in and around cities in Mongolia. The growing season for the beneficiaries increased from six to nine months and 3,000 people are now able to sustain a balanced diet.

Small-scale projects like the one led by the EC are helpful to a few people in a small area, but in time can grow to impact and influence people on a larger scale. Time is not on Mongolia’s side. Climate change has increased the presence and power of two major enemies of sustainable agriculture in Mongolia: desertification and dzuds, extended periods of harsh winter conditions.

Since 2006, the FAO has funded and supported projects to increase the sustainability of agriculture in Mongolia. Most of the funding goes to the livestock industry. The FAO, along with the Mongolian government, wants to increase the security and sustainability of herders and their livestock. This is based on both economic and historical precedents; 72.6 percent of land in Mongolia is used as pasture.

In 2009-2010, according to the Food and Agriculture Organization of the United Nations, 9.2 million heads of livestock, or 25 percent of the Mongolian livestock population, were killed due to a dzud. FAO emergency funds for the Mongolian project were used to protect the livestock in the seven most affected provinces immediately following the dzud and help replace the animals that were lost.

Urbanization and mining also contribute to the loss of pasture lands. Not all farmers are able to obtain assistance from the state after the loss of their animals during dzuds or the average harsh climate of Mongolia. Many of these farmers and their families are forced to move to cities to find work, food, and shelter.

Climate is not the only factor in the loss of farmers or pastoral lands. The edges of the Gobi desert are slowly creeping forward deeper into Mongolia, affecting the grasslands near deserts. Changes in weather patterns often whittle away at the grassland and help spread the desert soil and sands further. Tin, copper, coal, tungsten and gold are just a few materials that lie beneath the surface of Mongolia. The mining has been useful in improving the economy but is detrimental to the environment and sustainable agriculture in Mongolia.

Sustainable agriculture in Mongolia will improve with time. By working with different international bodies the government has proved that it wants to improve this sector of the economy. Food security and sustainability will also improve the quality of life in Mongolia. Hopefully, once again the families of the steppes will be able to live self-sustaining lives, now in conjunction with the Mongolians of the cities.