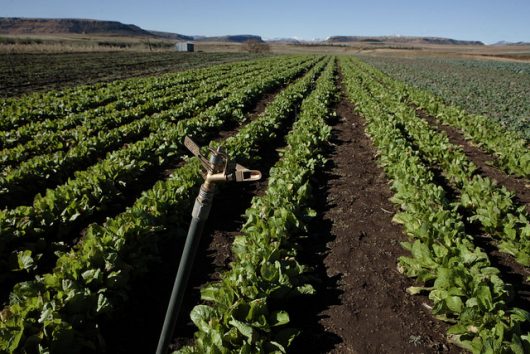 The Kingdom of Lesotho is a mountainous country in sub-Saharan Africa. Only around 10 percent of lands have agricultural potential, but most of them are degraded. Frequent droughts, irregular rainfall, occasional flooding and the severe climate conditions significantly influence the ability to produce sustainable agriculture in Lesotho.

Due to water and soil erosion, overgrazing and severe land degradation, at the end of 2017, Lesotho needed external food assistance. Extreme weather lowered the annual agricultural productivity. Food security has thus become one of the most crucial issues in Lesotho. In recent years, various international institutions, such as the World Bank, the Food and Agriculture Organization of the United Nations (FAO) and the International Fund for Agricultural Development (IFAD), have been continuously offering help to improve sustainable agriculture in Lesotho.

On Sep. 29, 2017, the World Bank financed Lesotho’s Smallholder Agriculture Development Project with $10 million to develop market output in Lesotho’s agriculture sector. The World Bank and the Global Environment Facility implemented the project in 2011. This project aims to aid smallholder farmers in exploring the agriculture market and boosting productivity.

In an interview with Lesotho Times in October 2017, Mahala Molapo, the Minister of Lesotho Agriculture and Food Security, said Lesotho’s agriculture sector was at a turning point. Molapo said the nation has made a mega-plan, which focuses on the chain process from agricultural input supply to the market. Lesotho would cooperate with different stakeholders to further develop sustainable agriculture in Lesotho.

“The ministry understands that our agricultural sector is vulnerable to the effects of climate change,” Molapo said. “Through our extension services, we will continue working with partners to support climate-smart agriculture.”

In the 1950s, Joseph J. Machobane developed a sustainable agricultural system called the Machobane Farming System (MFS), which is a simple, low-input technique based on an intercropping and localized application of organic manures. In 1991, the FAO incorporated MFS into its two agricultural programs in Lesotho. Under the traditional agricultural system, the general family needs 1.2 hectares to assure food security. Under MFS, however, the average family only needs less than 0.5 hectares to solve food problems.

In December 2004, IFAD implemented the Sustainable Agriculture and Natural Resource Management Program in Lesotho. This program aimed to improve food security and family nutrition, and it has trained farmers in field crop, fodder, pest and disease control and irrigation techniques.

In October 2012, Lesotho suffered a food insecurity crisis, which caused 725,215 people to need food aid. In response to this crisis, the FAO and the Ministry of Agriculture and Food Security launched a three-year cycle program named the Emergency and Resilience Program to promote conservation agriculture and ameliorate nutrition in Lesotho. From 2012 to 2014, this program supported more than 18,500 households.

For next steps, the FAO, IFAD and the World Bank will work to continuously strengthen sustainable agriculture in Lesotho, including:

Sustainable agriculture in Lesotho can be achieved with the persistent efforts of organizations like these. As Molapo says, “We are at a turning point and I believe with hard work, partnerships, strong systems and innovation, the vision of a food-secure Lesotho is within reach.”