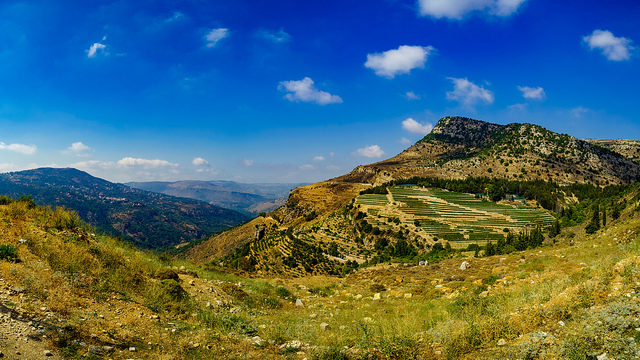 The famous concept of permaculture, developed first in 1978 by Bill Mollison and David Holmgren, has recently been integrated into the Lebanese agricultural system, particularly in the rural areas of the country. Permaculture is a design science aiming to combine knowledge and culture with habitats and human agricultural systems. It utilizes the principles of ecology and anthropology to ensure the ethical reproduction of the diversity, resilience and uniqueness of natural ecosystems.

Through the application of these ethical principles in their daily lives, people gradually transform into productive producers rather than simply being passive and dependent consumers. Therefore, permaculture not only unifies local communities through the development of teamwork skills and resilience, but also paves the way to a more sustainable agricultural system and environmentally friendly future.

The rural areas of Lebanon implemented permaculture in 2014, after countryside residents received training and workshops organized by the SOILS: Permaculture Association Lebanon. With a goal of initiating the creation of sustainable agriculture in Lebanon, Rita Khawand, a former Lebanese actress, co-founded the SOILS organization after winning a social entrepreneurship competition led by environmental and sanitation based non-governmental organizations in her hometown. According to Khawand, Lebanon needs such a creative process, as it helps humans in “respecting nature and man.”

Alongside Khawand’s vision, Fadi Kanso, a Lebanese agricultural scientist, joined the SOILS community following the completion of his education in Germany to invest in permaculture with the aim of implementing sustainable agriculture in Lebanon. Kanso highlighted that the main problem in Lebanon is the farmers’ dependence on monoculture, a tendency that seemed to be catastrophic during severe climate shifts where some people witnessed huge financial losses as they relied only on a single crop species.

Kanso also stressed the negative impact of the overwhelming amount of pesticides administered by the farmers in the country, as it led to a reduction in crop fertility by a yearly rate of 15 percent. Moreover, these toxic chemicals also manifest adverse effects through their contribution to the development of health problems, such as minimizing the levels of iron and magnesium in the body which are absorbed from the consumption of certain types of fruits and vegetables.

One of the main advantages of the SOILS organization’s permaculture project in Lebanon is its role in achieving food security for refugees through manuals designed to help vulnerable populations create their own microgardens, and thus have access to the necessary food products. Permaculture can eventually aid the government with the burden of limited resources, which has become a significant concern following the Syrian war crisis and the immigration of millions of Syrian citizens to Lebanon.

Rita Khawand and the SOILS community are striving to transform Lebanon from an underdeveloped non-environmentally friendly community to a developed country with a sustainable agricultural system by uniting entire regions to fight for a better and improved future. From the Bekaa region in the north to the village of Saidoun in the south, the dissemination of permaculture is becoming a national success as local residents indulge themselves in Permaculture Design Certificate (PDC) courses and learn how to overcome all financial and environmental challenges.

Despite the numerous fallbacks witnessed during the past few years, the positive impact of permaculture has created a sense of optimism among Lebanese citizens in their ability to succeed in the improvement of their country and their contribution in the development of sustainable agriculture in Lebanon.