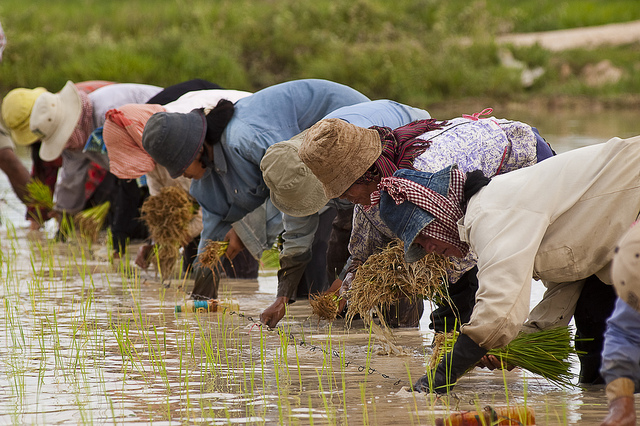 From 2004-2012, Cambodia experienced a spurt of economic growth due in large part to an increase in rice production. During that time period, the country’s agricultural gross product increased by 8.7 percent.

But since 2012, the growth in agriculture has slowed. In 2013-14, agricultural gross product fell below 2 percent. Much of the past growth came from the expansion of cultivated lands, but this expansion may have reached its limits. In order for Cambodia to continue to grow its economy and support those who rely on agriculture, sustainable agriculture in Cambodia will become increasingly important to the country’s future.

The United States Agency for International Development (USAID) is assisting Cambodia’s agriculture sector through the Feed the Future program. The program has trained over 193,000 farmers in new technologies. This has led to an increase in income among those in the farming industry as well as a 30 percent decrease in the number of underweight children in Cambodia.

USAID is continuing its work in Cambodia and has laid out its goals and expected results for the future. These expectations include continuing to help farmers increase sales and working with the private sector to grow and leverage investments in horticulture.

In September 2016, Kansas State University partnered with the USAID Feed the Future program to launch the Center of Excellence on Sustainable Agricultural Intensification and Nutrition (CE SAIN). The center seeks to increase sustainable agriculture in Cambodia with a combination of private sector innovation, public sector improvement and training in sustainable agriculture techniques. These goals are accomplished in part by innovation labs and technology parks that highlight new technologies and strategies.

Another project funded by the partnership between USAID and CE SAIN is being run by Penn State University and focuses on the northern part of Cambodia. This program will work directly with 250 women in the agricultural industry. It will teach the women new farming techniques as well as how to successfully deal with climate change.

Rick Bates, a horticulture professor at Penn State, said that the program’s goal is “growing more food, on existing land, using fewer resources and in an ecologically friendly manner”. This sums up why sustainable agriculture in Cambodia is such a vital part of the country’s future. When the expansion of cultivated lands is no longer an option, new and innovative technologies can help farmers grow crops more efficiently on the land that is available.