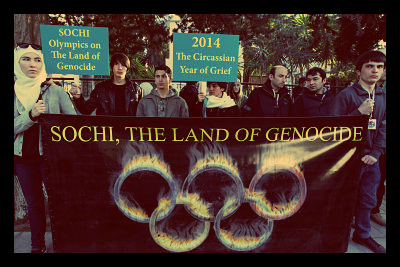 With the Winter Olympics now over, many are lamenting the failure of civil society and LGBT advocacy to impact the games, due in large part to the IOC’s unwavering apolitical stance. Yet what is more shocking is how little of Sochi coverage went to the Circassians, a North Caucasian ethnic group indigenous to the region.

In the 19th century, Circassians were the subject of a bizarre European and American fixation which arose in part from anthropologist Johan Friedrich Blumenbach’s claim that they were the origin of the white race. The image of the “Circassian Beauty” was extolled by authors from Pushkin to Dumas—all while the Arab-African slave trade imported Circassian women into Ottoman harems through the 18th and 19th centuries. Then in the early 1800’s, the Russian conquest into the Caucasus led to what many are calling the ethnic cleansing and genocide of Circassians.

During the years before the Winter Olympics, the Circassian Cultural Institute, among other organizations, united Circassians worldwide to raise awareness about the tragic history of the region and get recognition from the Russian government that the Russo-Circassian War was in fact a genocide—an allegation that Russian leaders, from Tsar Nicholas II to Vladimir Putin, have downplayed and denied. Roughly 700,000 Circassians live in Russia, with significant numbers in Turkey, Jordan, Syria and New Jersey in the U.S., where the Institute is based.

Delegations in Israel and Turkey have lobbied and protested both the IOC and the Russian embassies in their respective countries, with little response from either. Moreover, Circassian advocates and local community leaders were detained in the months prior to the Olympics. Many have also accused Putin of downplaying the ethnic heterogeneity in the region, and misleadingly portraying Sochi as an ethnically Russian region. While the struggle has been reported on by several reputable news outlets, discussions on Circassians in Sochi have failed to launch from the blogosphere into mainstream media.

Martin W. Lewis at Stanford University attributes the lack of reporting to confusion, uncertainty and overwhelming lack of awareness by Western audiences of the history and demographics of the Caucasus region.  Lewis suspects that the story, in the minds of reporters, may be too complicated for observers to bear, and furthermore distracts audiences from the “tunnel vision” of the Caucasian narrative—which has predominantly focused on Chechnya, not Circassia.

The disproportionate focus on LGBT rights and allegations of corruption in funding—not to mention the anecdotal and overdone coverage on Sochi hotel rooms and bathrooms—may have very well swayed attention away from the plight of Circassians in Sochi. And now that the Olympics are over, Ukraine and Crimea take center stage in Eastern European affairs. Looking back, Sochi seems like a lost opportunity for garnering the global awareness that only the Olympics can bring, especially for a region that has, until now, kept out of the spotlight.